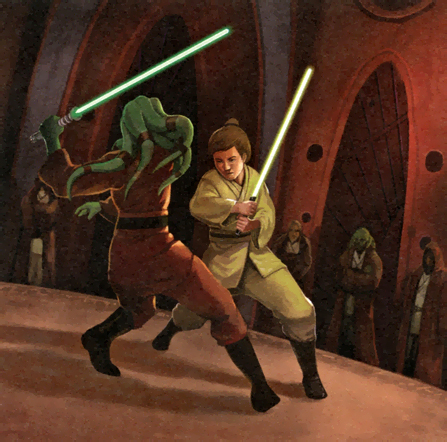 ​
[ THE RULES: ]​
Both duelers are still Padawans during the duel.​
No foul play. Daella is the ref and will call fouls if needed.​
The Force is permitted. Both fighters get one training saber. They can't use their opponent's if he/she drops it.​
Three training saber strikes to the body equal elimination.​
A fighter can also be eliminated by being knocked out of the ring, or going unconscious.​
Both fighters have until December 22 to finish the fight. I will decide on the winner if no one was eliminated.​
Have fun!​

In the Jedi Temple on Coruscant, the Grand Apprentice Tournament had begun. The top Jedi Padawans have been selected. It was now the third round of the tournament. Both participants managed to best their previous opponents and were now just one win away from the free-for-all finale.

The fight would be in the Jedi Temple's Sparring Arena. Daella stood to the side of the circular ring. @[member="Diana Moridena"] and @[member="Lilia Dur'iar"] were asked to take their places on the opposite sides of the arena. Spectators also filled the room and stood several meters from the arena. These spectators included prospecting Jedi Knights and Masters looking for a Padawan, as well as the other participating in the tournament yet not fighting at the moment.

Once both fighters were ready, Daella gave the signal to begin the fight.

Once Knight Apparine had given the starting signal, Lilia's training saber ignited with the snap-hiss so familiar to the temple. Bringing the green blade up in an underhand arc aimed at her opponents wrist - if she missed, it would slam into Diana's chest if she didn't dodge - Lilia moved to retract her extended wrist before a countermove could be made. Of course, a number of things could go wrong. Diana could block or dodge, sending her off-balance, or the training saber could be knocked out of her hand and that would oh so well for her.