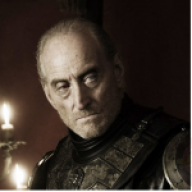 HAIR: Black with hints of Grey

+ Old Man Strength: Detrik is surprisingly strong for his age. He is physically capable of squaring off with much younger men.

+ Skilled with a Blade: Despite his current circumstances, Detrik was once a valiant and perhaps even honorable Mandalorian Warrior. His weapon of choice whenever he went into battle was a vibroblade.

+ Money: Because of his activity in spice dealing and other illegal affairs, Detrik has acquired quite a fortune.

{±} Fierce - When in combat or when dealing with matters he truly cares about, Detrik fights or interacts using all of the power of his emotions.

{±} Ruthless - Detrik will do whatever it takes to achieve his goals, no matter the cost and no matter how long it takes.

{±} Materialistic - Detrik is obsessed with wealth and power.

{±} Amoral - Detrik has stopped caring about the morality of his actions long ago. Whatever makes money, gives him power, or achieves his goals is what dictates his actions.

{±} Cold - Detrik is completely devoid of any love or kindness. Those emotions were severely wounded at the death of his original Clan-mates, and killed with his wife and son.

- Reckless: Detrik Vaun was able to rise to prominence in the Unknown Region'sspice trade with little serious opposition. Years upon years of unchallenged success have made him believe that he is unbeatable.

- Stubborn: Detrik is as stubborn as an ox. It's his way or the highway.

- Justified: Detrik more or less believes that the galaxy owes him, and almost always feels justified in his own actions and decisions.

- Poor Vision: Detrik was rendered blind in one eye by a Jedi's lightsaber blade. He has never gotten a cybernetic replacement, and the vision in his right eye is pretty poor. He can only see things clearlyif they are within 5 meters of him.

Detrik Vaun is 6'1" tall, has pale-colored white skin (from always wearing his armor whenever he goes out) and maintains a muscular build for a man in his late 50's. Detrik's body brandishes many scars, most of which are vibroblade cuts and bruises from blaster bolts impacting his armor and blunt weapons striking him during combat.

Detrik also has a burn mark that runs along for an inch on both sides of his left eye, a blemish that he received from a Jedi's lightsaber during a fight. Detrik has black hair with some shades of grey cropping up on the fringes.

Detrik Vaun was born on Mandalore into a small but otherwise typical Mandalorian clan. He was taught to live by the resol'nare, learned to fight while he was still a child, fought with his family when the Mand'alor beckoned them, and did everything typical of the model Mandalorian. Detrik lived an incredibly happy and relatively care free existence until his mid-twenties, which is when the entirety of Clan Vaun besides Detrik was either declared KIA or MIA in a single multi-day battle with a slaver fleet in the Er'Kit system. When Detrik got back to Mandalorian space, he returned to the clan compound alone.

Detrik was a single man left with the task of restoring an entire clan, but he didn't start this task immediately. First he spent a few months maintaining the compound alone, asking himself how to prevent what had happened to him - to prevent losing everyone he loved - from ever happening again. He wasn't force sensitive, he couldn't use some grand force technique to bolster everyone's spirits in battle, and Mandalorian Iron only protected people from physical attacks on the wearer, it couldn't save your family members from dying in the cold vacuum of space, and even the most intensive and detailed military planning could never save everyone in a fight.

The only path that Detrik saw that he could take if he wanted to prevent being alone again was to abandon the sixth tenet of the Resol'nare. He would no longer answer the call of the Mand'alor, from now on he would only march to the beat of his own drum, and he would raise a clan from the ashes of Clan Vaun that answered only to itself.

Detrik went on a massive recruiting spree, targeting impoverished non-Mandalorians and degenerates that he found during his travels with promises of a better future he was able to quickly build the Clan's numbers. During the early years of clan-building, Detrik trained each and every newcomer personally in the ways of a slightly distorted version of the Resol'nare, replacing answering the call of the Mand'alor with answering the call of the clan's Alor. If a person failed to meet his standards, he would kill them in front of the others with his vibroblade. This only happened twice.

Eager to see how loyal these converts were, Detrik quickly tested their mettle in a long-term, highly unethical mission to claim vengeance on the Er'Kit slavers. Lacking the numbers to take on the slavers in a direct conflict, Detrik conceived a dubious and convoluted plot to hurt the slavers and their profit margins on Er'Kit at the same time: buy a bunch of spice in bulk, find a way to make it look like an adrenal, pitch it to the slavers as a stimulant for their slaves, and then once the slavers have been giving it to their slaves for a few months, cut the supply and intercept and destroy any suppliers who might curb the side effects of spice withdrawal.

The plan went off without a hitch, resulting in the deaths of countless slaves and many of the slave masters who had continuously tested the slave's "stimulants" for themselves. The mission's success gave Detrik three things: proof that his new Clan was loyal, a sense of fulfilled revenge, and enough credits to buy more defenses and arms for his Clan and his homestead. This trial into the spice trade had been beneficial to the Clan, and Detrik saw no need to change things. He continued operating in the spice trade as he expanded Clan Vaun. During this time, Detrik got married to a woman named Y'vitii and had twin sons. The first son, Emil Vaun died shortly after childbirth. The second son, Mereel did not suffer the same fate, but Detrik's wife was a sickly woman, and died during the operation.

Distraught by the loss of his wife and son, Detrik slipped into a state of continuous-drunkenness that lasted several years, and left the raising of his son during this period to his most trusted enforcers. Eventually Detrik's illegal dealings caught up to him, and him and his clan were forced to flee Mandalore. The Clan ran all the way until they reached a planet named Glacies Domum in the Unknown Regions, where they set up shop in the form of a castle in a desolate geyser basin.

The ordeal forced Detrik to retake control of Clan Vaun, and he stopped drinking. But he always felt like something was missing from his life, and the part of him that could be kind or loving had left his life with his wife and first son.

Despite not feeling any love toward the boy, Detrik taught his son Mereel the only things he had left to offer. He taught the boy his version of the Resol'nare and personally oversaw the development of all of its tenets in the child. He held nothing of his business away from his son, even going as far as to give his son the task of hunting down and executing smugglers who crossed the Clan's spice deals once the boy turned sixteen.

Eventually, Mereel, the last trace of his family, rebelled against Detrik and fled the Clan Vaun Estate. Unlike the previous losses, Detrik did not feel sad, he felt angry. Ever since his son's departure, he has been ordering underlings to hunt Mereel in some way or another. All the while, he has been building Clan Vaun's presence in the Unknown Regions with ease.