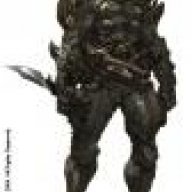 strapped in a chair was a rather powerful man, not in the sense of strength but title. He was the owner of a multi million credit republic business, and business was good for him. The mans eyes blurred and swayed as he saw a man he couldnt can't quite make him out but he could feel his presence in the air. Slowly he began to hear him speak, the business man can't make it out since his ears were ringing. The ringing goes away and his vision starts to clear slowly. The man has an orange jumpsuit on and is smiling menicingly at him. his fair pale skin shined in the light as he began to talk on, his words now starting to come in clear. "It's almost like drowning in air, suffocating on the words of those who think they are better than you. you know what I mean?" he sits in front of the CEO smiling twirling what looks to be a hatchet in his hands "It's like looking at everything under a microscope and seeing what things are up close bit by bit by bit by bit. You really grow to understand that people like me don't belong in your world, that im considered crazy because I think different then all of you." the man now frowned then grabbed the man by the cheeks squishing them together. "But im not crazy right? I'm just trying to make a living, I'm better than you and all of you know it." He let go of his prisoners cheeks getting up and startef to pace around you "Now let me ask you a question my friend. Why do people like us choose to live in a world built for you instead of building one for us?"

The man smiled once more but the business man only cowered to himself trying not to wet himself. "Look at me, look at me when I talk to you." Parker laughed and looked down at the man, he could only stare downward trying not to make eye contact. "I SAID LOOK AT ME WHEN I TALK TO YOU!!" the crazed man screamed and wrapped his hand around his prisoners throat holding his hatchet up to his face. "Do you want me to cut you up like I did your friend?! And your pretty little dancers?! DO YOU?!" Parker dragged his hatchet across his face bleeding him slowing as he screamed as loud as he could. "I AM THE REAPER AND YOUR SOUL US MINE!!! NOW FRAKING LOOK AT MEEE!!! " Parkers prisoner had all but pissed himself before looking at Parker scream in his face, "Good, now give me the code to the vault. Write it here on this data pad." Regaining his composure Parker held a pad to the mans hand as he wrote down what the man needed on it. "Let me tell you something now, my new world doesn't need you." Parker laughed and pulled his Maser out the back of his pants shooting the man in his head. "Don't forget to tip your dancer."

Smiling Parker walked out onto the Zeltros strip. He had a Chain of casinos to rob and a bundle of CEOs to kill. Money and violence, his two favorite things in the galaxy. It was time to go to work.

Dirk scowled as he found the body. Great. Another one to add to the count. He pulled out his comlink and switched to the police band. "Victim found. Dead. Shot in the head. Light mutilation. " He paused, and knelt down, examining it, wrinkling his face at the stench. "Fresh. Not more than an hour ago." He looked up, and sent the coordinates. A retrieval squad would be coming soon. He slipped out of the room, focusing on ignoring the atmosphere of partying and celebration around him. There was a job to be done. Several Zeltrons approached him with wide smiles, but he waved them off with his badge, then activated a holorecorder, that showed an image of @[member="James Parker"] slowly circling.
"You seen this man?" He studied their faces, looking for some indicator of their truthfulness.

Private room of the club

In the corners of the room lay a few more bodies horribly mutilated and destroyed, one of the man's partner and three of the club's dancers. They were just in the wrong place at the right time. Not that Parker didn't enjoy dealing with hard compromises to his plan, he had to do what was necessary. Luckily the dead man strapped to the chair was identified as Roger Mathews the owner of a casino called the guilded gambit no further then two miles from here. That had to be Parker's next stop. Upon further inspection of the body his keys were missing along with his casino's master pass. "He was in here a few hours ago, he said he knew the guy and wouldn't take no for an answer." one of the dancers said trying not to hurl over the sight of her dead friends and customers. "So we let him in, did he do this?!" the woman began to sob and look away. "I'l go get the recording from the security room." the dancer walked away and brought back a holorecording for the officer. "He left going down the strip towards the casinos."

"Lucy I'm home!!" Parker laughed and entered the casino smiling and grinning like an idiot. "This is a nice place!" and he wasn't wrong the casino lights flashed from the ceiling the entire inside of the building beautiful and modern. The sound of the crowd bustling having fun and cherishing every moment was heard all throughout the establishment. Parker smiled and moved about the area indiscreetly placing fire bombs disguised as bottles of alcohol everywhere throughout the building until he made his way to the elevator. Pressing the button he stepped into the machine and smiled brightly as it took him to the top floor. "Time to make a deposit."
You must log in or register to reply here.