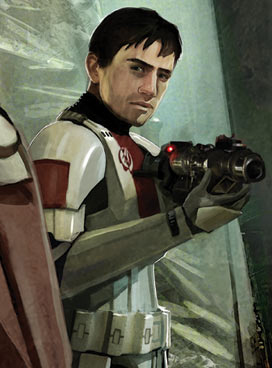 Born in 816 ABY on Anaxes, Appolon always enjoyed the prospect of joining the Republic's army. The military traditions of the planet spurred the boy on to be the best man he could possibly be. Yet over his time as a child, he developed a neurosis due to his pursuit of perfection.

Appolon joined the Republic Armed Forces when he was 17. While his talents as a combatant were obvious, his mental problems were distressing. Yet, they were not at the level required for a discharge and the Republic Military had the perfect place for Appolon.

In 836 ABY, Appolon was assigned to Havoc Squad - a band of misfits that could certainly accept someone of his disposition.