Character Bio
Aleidis recovered it, and apparently it's being held by Boolon. Somewhere.

Yet it makes sense to take the Darkstaff while it's still in possession of the Republic and space it into a random star. The Jedi wouldn't tolerate such an artifact's existance. It would need a group of people (doesn't have to be Jedi) who are willing to give their lives in order to destroy the staff (it's biggest weakness, and why it was destroyed in canon, and also no one has to die).

Plus, it's best if this item is destroyed like it was in canon and forgotten forevah.

Who's up for a quick thread of this? 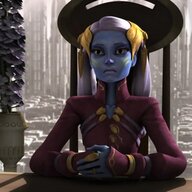 Character Bio
Apparently the Darkstaff and Velok's crystal were both thrown into a black hole.

Yo whatup. It's getting thrown in a black hole by yours truly. I don't know why we were keeping the pieces to begin with.

Aleidis Ijet said:
I don't know why we were keeping the pieces to begin with.
Click to expand...

I didn't even know it existed in Star Wars RP.net until the Tython Archives thread.

But destroy it for the Republic! And now...

I appreciate the thought, @[member="Flint Dexen"], but it's pretty much done with by now. Aleidis effectively fell off the face of the Galaxy and tossed it into a supernova.