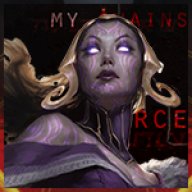 No one in their right mind would come to the this tiny speck of dry, scrub-like desert and burning, inhospitable polar regions.

Which of course, was why Er'in was here, and why she had brought [member="Zenva Vrotoa"] here.

Not for a romantic get away for two, that was for sure. The blazing white star overhead would give the Zabrak a tan to remember if they were not careful.

No, they were here for the Tomb.

A towering structure of metal and glass, twisted in odd ways that spoke of an alien mind and Sith or Dark Side mentality, it pressed on the mind in strange ways, causing flickers and visions that were more than sunspots.

It was also utterly incomprehensible to Er'in, so when the Zabrak had approached her for one of her more... specialised items, the requested payment was a trip to a dull backwater moon where a minorly infamous - but talented - Sith had been buried, along with their notebook - and probably numerous booby traps and artifacts. Er'in didn't really care about anything else, Darth Kilari's holocron was incomplete - the final of her works had been created after it was made, but a long conversation with it had revealed that she never, ever did anything without writing it down, and the holocron was pretty convinced she would have been buried with it.

"Okay." She said as they stood in the shade of the landed vessels, letting their hulls absorb the heat for the moment. "As much as it pains me to admit this, Darth Kilari was a cybernetics and technical expert, in addition to her alchemical knowledge - it was how she kept herself alive after she was reduced to less body parts than Darth Vader sported. Her tomb was constructed to her exacting, and probably lethal specifications. Which is rather where you come in..." She almost said 'my dear', but she wasn't entirely sure her companion would have responded well to Hapan court formality and Er'in had few enough allies, someone at least neutral would be useful. 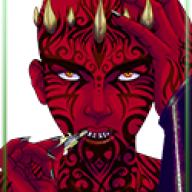 Character Bio
Velos V. What a complete, and utter chit hole of a world. The Zabrak Matron thought to herself as she stood waiting in the shade of one of her drop ships. Ahead lie their target, an ancient tomb to some twisted half droid Sith. A quartet of Walkers circled it, ground penetrating radar hard at work in an attempt to map the building. Zenva hated the Sith. Not just the one who's tomb she and her Clan would be entering, but Sith in general. All of them. She still couldn't figure out why she was here.

That wasn't entirely true. She was here to uphold her half of a bargain. One she simply couldn't understand why she would have made. The services of her, and her clan in exchange for a clever little Sith trinket. A trinket she couldn't even use! And there in lie the issue. Something had compelled her to make this arrangement, and as she stared at the ominous, mind invasive tomb before her, she could feel that same Something whispering at the edges of her mind.

The Sith beside her spoke, reviewing some of the details as to why they were here. The Matron's bizarre yellow-red eyes rolled behind the concealing helmet of her prototype armor. She felt nothing of this world's horrendous sun, of the scalding winds the whipped across it's surface. She shielded her eyes against the harsh light purely by reflex as she looked about the area. Eventually she turned back to her companion. "Don't worry, Lady Tenel. I've no doubt this long dead Sith of yours left behind more than a few surprises to protect her body, and whatever secrets she may have had with her, but we'll handle it. That is after all, why I am here."

The comm system built into Zenva's helmet chirped, and the Zabrak held up a hand to stop whatever reply her Sith companion might have. "Images coming in, Matron. Are you getting this?" Came the report of the Captain of her personal guard. Sure enough a digital recreation of the tomb's lower levels appeared in the corner of her HUD. Zenva turned away from her associate, gesturing sharply toward the tomb's entrance. A moment later ten of the Matron's Elites rushed across the wasteland between the drop ships, and the tomb.

Zenva turned back to [member="Erin Tenel"], and held out her arm as if they were significant others. "Come along, darling. We have a rough map of your tomb. Shall we see if my boy's can open the door for us?"

Character Bio
Er'in didn't so much as miss a beat, her glittering purple eyes not even blinking as she took the offered arm with all the grace and elegance of a princess born... which she was.

Behind her, the two lethal forms of a pair of Jedi Hunter Droids unfolded and stared at her.

"Yes?" One asked, a barely concealed tone of boredom in her voice.

"Coming?" Er'in asked, as if it were a genuine question and not an instruction.

"Hopefully this will be more exciting than the last two. I am not cutting you out of Weft-Spider webbing again." The second droid said to the first, spinning it's lightsabers with a gesture that had never been programmed in and setting out into the sunlight after her 'owner'.

Er'in did feel the heat - her clothing was not exactly designed for this weather, and the cloak provided little more than shade - but any good Sith, like any good Jedi, can will away discomfort. And she wasn't being outdone by a client - no matter how classy she was, or how renowned she was in the Underworld. A little tickle at the back of her mind sang a familiar warning bell, but just like every other time, Er'in ignored it with the aplomb of someone fully capable of failing to judge social risk, despite their intelligence.

"Your boys do seem quite... competent. I've always treated these things as a more solo endevour - gets me out the library."

[member="Zenva Vrotoa"]
You must log in or register to reply here.

The Dungeons of the High Castle
2

In the Darkest Depths