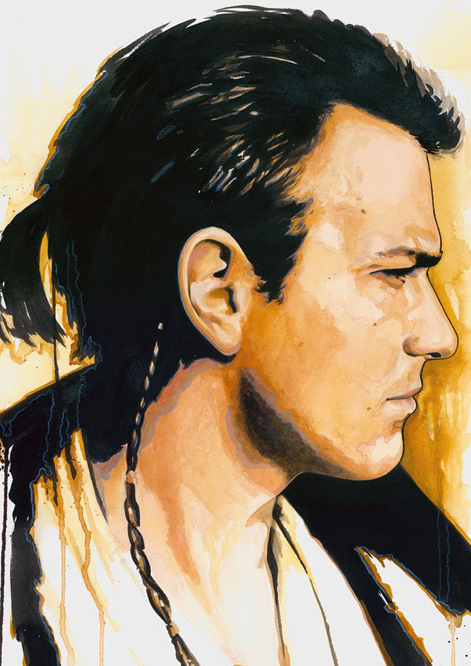 -Orthodox Jedi mentality puts him at odds with the newer, more free spirited Jedi
-Stoic and quiet demeanor makes him seem mean and rude, almost arrogant
-Reliance on logical thinking can sometimes be a downside.
- Is not very social.


-/+ Typically gives a benefit of the doubt to those even if they don't truly deserve it.
-/+ Wholeheartedly believes in second chances and redemption- for all, though he acknowledges that even those who seek redemption can still be punished.
-/+ Does not wish to get emotionally attached to another.

APPEARANCE:
Average height and average build, Darin is by no means strong, but he definitely has focused a majority of his time dedicated to his Ataru training, making him lean and having an almost gymnast-like build, resulting in a focused and lean muscular structure.

BIOGRAPHY:
Born on Balosar, Darin is a rare exception that his adoptive Balosar parents actually gave him to the Jedi as an infant, and therefore he never knew of a life without the Jedi. He was reserved as a child, and sought more into training and education of the galaxy rather than socialization, resulting in a quiet, reserved demeanor and personality. He always thinks before he speaks and acts, resulting in some people considering him slow and dim-witted, when he prefers simply to rationalize everything before acting.

This comes from a study of the older Jedi texts, which Darin hopes to model himself on. He seeks clarity in his emotions by being in control, and the result is him attempting to constantly and consistently be in a sort of meditative emotional state. While Darin by no means ignores emotions he has, he hopes to be able to not act on them or let them dictate his actions. He especially values the Jedi code and the tenets of the Jedi, and attempts to live them on a day-by-day basis. Darin is a firm believer in not abusing the force for personal gain. He rarely uses the force when not training, or meditating. He believes that the force is not a thing to be used at a person's whim, but a gift and that the force touches those it deems worthy to receive it's gifts, whether they tread in darkness or in the light, or a delicate balance between the two.

This has led to some conflict with other padawans, who believe that the only way to achieve balance and peace in the force is to completely eradicate the dark side and the Sith, and any of those who follow in it's path. Darin has gotten into several well-structured but intense arguments during his time as a youngling over the issue, which required him to commit more time in the day to meditation than usual. He seeks to find an answer to the question, but a part of him knows that as long as there is water, there will be rain.
I write characters and whatnot
You must log in or register to reply here.