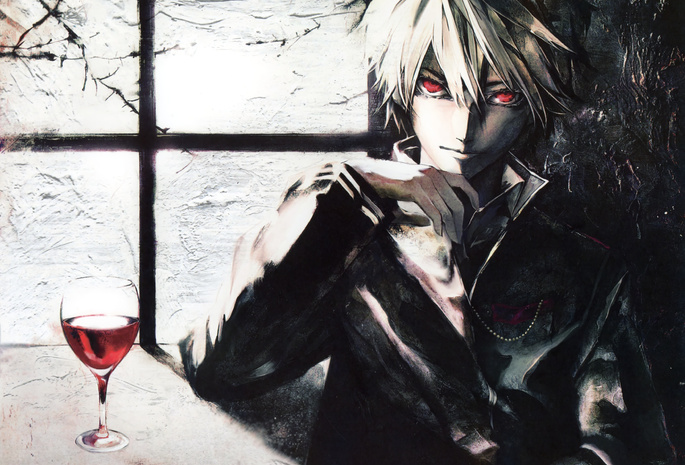 STRENGTHS AND WEAKNESSES:
+ Stealthy: Constantly being in dark alleys an other closed in places, he is a skilled hider.
+ Killer: With the unconscious aid of the force, and a weapon of opportunity, he is unparalleled and unpredictable in a fighting situation.
+/- Vision: His eyes are naturally adapted to darkness, due to his long amounts of time in shadows. However, he has a strong sensitivity to light.
- Paranoia: Dante has an extreme case of paranoia. Since he never knows when another vision will go off, he is hard pressed to trust anyone.
- Insomniac: He hardly ever sleeps, as he is kept up by the voices. The fact that he almost never sleeps only drives him more insane.
- Frail: Because of his constant canabolism and lack of sleep, he is very weak physically.

BIOGRAPHY: Dante Xehanort has had a life of pain since he could remember. Nothing has ever been normal for him, even in his childhood. The visions started when he was five. He was in the living room, playing with his toys, when suddenly the house was on fire. He frantically searched for his parents for help. He eventually found them, but to him they looked like demons from hell. Not knowing they were really his parents, he tried to save them by slaying the demons. He grabbed a knife and stabbed each over and over again until they stopped moving. It was only after the deed had been finished that the vision faded and he was left staring at his two parents. Seeing this, he did the only thing a kid of his age could do at the time: he ran away. He lived on the streets of Coruscant for years, until a Jedi found him at eleven. He was taken to the temple for study, and the Jedi found that he had an unusually high amount of midichlorians. Unfortunately, the amount was unbearable for him, and that's why he kept on having the strange hallucinatory visions. Seeing that the visions were force induced, a team of scientists set to work in trying to extract the midichlorians from him to help him out. By the time thy had begun, Dante hallucinated again, this time seeing the three doctors as disgruntled freaks, with black ooze dripping from their mouths. Screaming in terror, he grabbed the nearest weapon, a scalpel, and killed each of them in turn. Running from the facility, he made his way back to the streets of Coruscant. Over the years, the visions would drive him mad, with the addition of multiple voices. These voices would often terrify him, as they were usually that of the people he had killed. Since he doesn't go out much, his only food source is usually his dead victims. He often tries to stay out of sight, but will sometimes wander back into the main crowd. Deaths often follow.