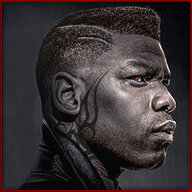 NAME: Cross Nukahmade
FACTION: CIS
RANK: Operative
SPECIES: Human/Mandalorian
AGE: 26
GENDER: Male
HEIGHT: 5'11
WEIGHT: 170 lbs
EYES: Blue
HAIR: Black
SKIN: Caucasian
FORCE SENSITIVE: lolwut
Language: High Galactic
---------------------------------------------------------------------------------------------------------------------------------
Personality, Weaknesses, and Strengths:
+Expert Pistol Duelist- Cross has developed a form of fighting that displays a routine of duel-wielding a set of pistols almost to the extent of a martial art. Cross utilizes a self-taught form of sophisticated close-quarters gunplay that incorporates using ranged weapons as melee weapons and more common applications such as shots from behind the back.
+Weapon knowledge and accessibility- All but the most exotic and most rare of weapons have been studied and used by Cross. Preferring long range over short range, he often uses a sniper rifle when offered the opportunity to do so or can instead prefer to switch to short range combat and utilize his pistols and energy swords.
+Stealth and Subterfuge- As is required for his line of work, Cross is an practiced expert of stealth and subterfuge.
***
-Excess Savagery- Cross is a natural paragon, and thus is ruthless, savage, and unforgiving in combat and during missions. If not kept in check, Cross could lose highly sought after information by killing people he shouldn't execute, or act in similar ways politically when dealing with upper echelon allies or equally important, enemies.
Overly Confident-
Generally has bad nerves and is impatient, which in combination has created an almost obsessive death stick(cigarette) addiction. If he can be seperated from his packs, Cross tends to be irritant, moody, impatient, and feels a driving sense of an impending breakdown(though it wouldn't happen to that particular extreme)

Cross generally embodies an allure and cool personality, yet boasts a shady, dangerous personality that, unless a situations calls for something different, projects only a few facial expressions, limited to moments such as when the Sith Empire is disrespected in his presence, or his calculations on a target are less than expected, which in turn will force him to issue a compliment. Though he is respectful and kind to his allies, combat tends to trigger a savagery within Cross that could cause a rookie partner to vomit during combat. His ruthlessness stems from his obsession to finish his objectives at any cost, punishing those whom would try to stop him without prejudice and without mercy.

Weapon(s):
Imp Pistols- Cross abuses the semi-automatic feature of these pistols to their full extent when utilizing them in combat. Because of Cross' lifestyle it shaped a fighting style specifically designed to engage multiple targets at once. Cross most often calculates the most precise angle for targeting an opponent and predicting where to be in order to avoid being shot by an enemy while also firing a shot of his own. This, combined with gunplay results in a man whom would strictly utilize guns instead of blades. In melee however, he's still able to utilize his weapons to perform melee strikes and when the opportunity arises has the hand-eye-coordination to land well placed shots fired from behind his back or shoot targets to his left and right by firing dual shots with crossed arms.

Sniper Rifle- When doing missions involving intel, spying, or even assassination Cross tends to stick to this weapon due to its reliability. His own drive combined with his training in the military makes for a practiced shot thats had years of experience to forge an aim that hits most targets without second tries.

Energy Sword Favored for their accessibility, Cross utilizes these blades in combat for stabbing and throwing.

GEAR:
Subcutaneous Comlink- Favored for his lack of time away from the field, Cross prefers to manage less than he should have to, so his sub link was implanted not long after he became an Operative.
Electronic Lock Breaker- This tool's reliability has been tested many times by Cross, and by his own standards could recommend it to nearly anyone.
Homing Beacon- Obvious tracking device, is obvious.

I'd forgotten completely about this movie.

How you made it all the way through this without writing 'Kata' once is beyond me. Welcome to the board! And honestly, gunkata didn't cross my mind while I was writing this xD

Beskar'Gam | Kebii'Aden​
You must log in or register to reply here.