Solider of the Republic 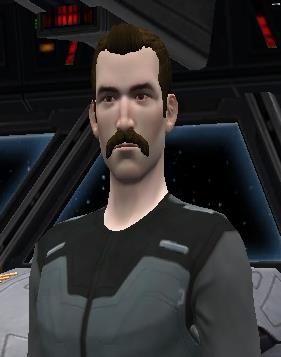 His strengths are his versatility, cunning, suave, his adeptness at stealth and concealment, he is loyal to the empire, his skill with the heavy-hitting, sniper rifles the empire made for their intel operatives, as well as skill with vibro knives and knowledge of toxins and poisons. He is a skilled sniper and so is to work form distance as well as close in.

His weakness are his distrusting, and scheming nature you really never know what he is planning, his use of snuff {star wars Copenhagen smokeless tobacco} a habit pick up on Hutta posing as a bounty hunter to build his he network of informant and underworld contacts, and his mission first and by any means attitude.

APPEARANCE: A tall thin man, with subtle features his narrow eyes and neatly kept pointed imperial goatee and dark brown slicked back hair all that set him apart from any of the other imperial officers. While in his imperial uniform he is a stern, cold, ridged man, but his appearance and demeanor change to whatever it takes to accomplish his mission.

Born of the jungle world of Dromund Kaas he is the son of an Imperial regional governor (mother) and an Imperial military officer. His life was not unlike any other well do imperial non-force user he had one of the best educations and training in the empire. He began the imperial indoctrination process at a very young age hard wiring him for obedience and loyalty to the empire, he did very in school he was very charismatic and intelligent. His life went on like any other imperial with wealth and influence until he turned 18. He had become a very suave, cunning, and intelligent man and he was selected to attend the imperial intelligence academy which he did it was great honor the training was long hard, brutal and the intense indoctrination process was more than many of fellow trainees minds could take, while he was never really above average in the strength department, he relied on his speed intelligence cunning to be able to outthink, and outmaneuver his opponents turning their own strength against them. While at the academy he was well trained in the arts of infiltration, seduction, and assassination as well as slicing, subversion, manipulation, and deception. He was trained in advanced blaster rifle tactics, stealth, vibroknife fighting, use of toxins, poisons, and advance medical training. He had learned to be as versatile and deadly as he was suave &, cunning he was top 2% of class when he graduated the intelligence academy he selected for sniper school as well given his marksmanship skill adding yet another to his arsenal after graduating 3rd in his class from sniper training he was immediately sent off to cipher training which he completed but the empire had fallen was scattered he was given an X-70B Phantom class starship as a graduation present he set off to build his network of informants, and underworld contacts he has just returned from Hutta to join the Frist Order his sizeable network in place it quickly mostly due to his mother political contacts and his furthers military ones. He made a few of own on Hutta Smuggler’s bounty hunters, crime lords, the ruling Hutt himself refused to take sides but would still prove useful as Colrenn had planted several listening devices in the Hutt’s places while he had been on Hutta.