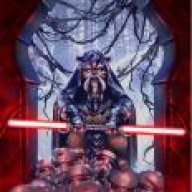 Courage: Chok'Tok is one of the most courageous ewok of his race, he will race into battle knowing he might die even if he doesn't.


Motivation/Dedication: he is both very seriously motivated and dedicated to becoming one of the most elite and dangerous with in the galaxy, one day he will/might surpass even the emperor himself.

He is not a pilot, can't even reach the throttle.

Chok'Tok was born the third cub in his den, when he was bron he was also the smallest of any ewok but as he grew he became one of the biggest and found he was a warrior from heart, as he grew he showed force sensitivity and then the day came for him to try and find training, he left his planet.

During his absence the planet was invaded by a faction of soldiers and he found that his parents and siblings had been killed and skinned, finding this out he started to show a strong hatred for the republic and the jedi since he felt they should have done more to stop what was happening, he also started to have a hatred for the omega protectorate since they did little to nothing for his people afterward.

At this time he was being trained by his master in the empire and vowed to one day get revenge on the ones that had allowed his kin to be slaughtered, he still holds true to that vow and trains diligently to get his revenge on the republic and all their allies.