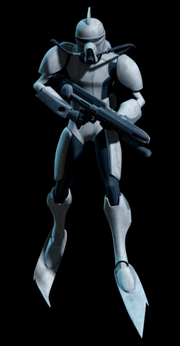 ​
​
Name: CC-808 “Shark”​
Faction: CIS/Dread Guard​
Rank: Specialist​
Species: Fett Clone​
Age: 20​
Sex: Male​
Height: 6’1”​
Weight: 200lbs​
Eyes: Blue​
Hair: Black​
Skin: Fett​
Force: Dead​
​
​
Strengths:​
Scuba Steve, Damn you! – Shark is a SCUBA trooper, focused with water worlds and underwater combat​
Space Combat – Closed suit and needing to remember any damage can kill you. Plus Zero G isn’t /that/ far from under water​
Driver of the things – If needed, he can act in plantary engagements as a driver, co-pilot or gunner​
​
Weaknesses:​
Not good on the Surface – Shark isn’t very suited for land operations​
Close Quarters – Under the water or in space doesn’t leave much room for CQC and as such, its his least talented combat sill.​
​
Appearance:​
Fett. Clone. Clone. Of. The. Fett.​
​
Bio:​
Unlike other clones, Shark stayed around on Kamino for a bit longer. While he worked toward the standard training goals, he also was educated in self contained combat roles, namely Zero-G and under the ocean combat. Once he was deployed, he was attached to a special team to give him the combat roles he sought quicker than the land roles.​
​

Welcome to the Dread Guard. Gonna be interesting finding a place to put your...unique skills to work. I'm the Aqua man of the Guard. Not always useful but you'll be glad I'm here when the time comes
@[member="CC-329 Nadir"]
You must log in or register to reply here.