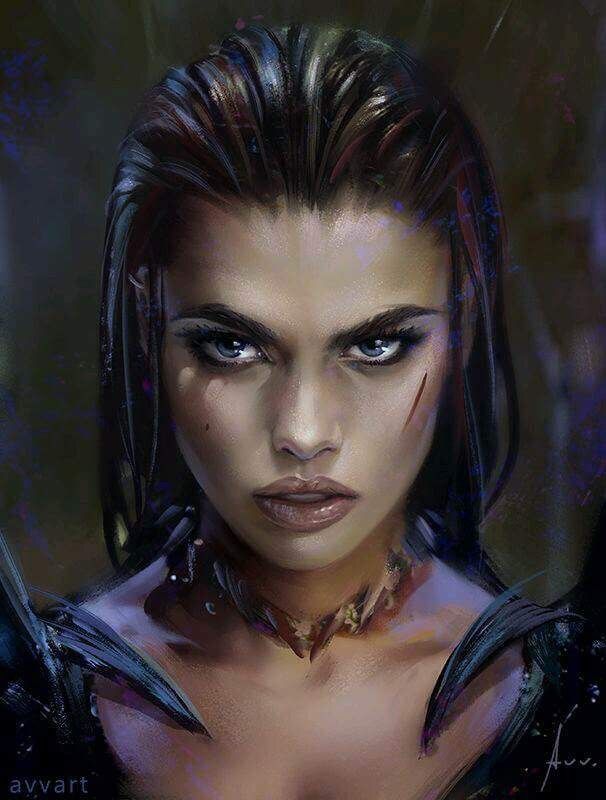 Strengths & Weaknesses​
+Survivor - She survived being brought up by Anaya Fen, she survived prison on Mandalore and she survived betrayal of the Sith Emperor.​
+Clone - Calina is a clone created from the DNA of Jared Ovmar and Anaya Fen. She learns faster than most and has an almost photographic memory, making her more intelligent than the average 22 year old.​
+New face - Calina’s new face is unrecognisable from her last, a feat achieved through extensive reconstruction. Necessary for her to survive the hunt that followed her treachery.​
-Facade - Calina is a SIth Lord, an entrepreneur. She is confident, ambitious, impetuous and calculated. But all of this is just a facade. Calina, is afraid, alone and insecure.​
-Loves Monsters - Calina sees them as misunderstood, she adores them, and will often place herself in danger simply to get close to one, or attempt to control them.​
-Bitter - Nothing has gone her way, all her goals have fallen flat and she is none too pleased by this all.​

History​
Calina is not what you would consider a traditional child. Anaya Fen, Sith Lady and known psychopath fled the reaches of her lover, Jared Ovmar with one thing in mind. To create something to be her own. To build someone to love and depend on her. To create a legacy to leave behind when she finally met her end.

Calina Ovmar was grown, a clone of DNA from two parties, Anaya Fen and Jared Ovmar. Believing that Ovmar was unaware of her activities, Anaya made use of his own cloning facilities on Kamino, bringing their child to life. Calina was brought into the world when Anaya became aware her every move was being watched, fleeing with Calina out of Ovmar’s reach - or so she thought.

Calina’s childhood was spent on the move, hopping from planet to planet. Well travelled from her awakening, she has learnt a great deal from her insane mother. Being raised by Anaya had its drawbacks, with a naturally sharp tongue and fiery attitude she has crossed Anaya on many occasions, sometimes, Anaya's wrath presented itself in a simple torture from lightening, other times, she would be beaten within an inch of her life.

Despite always being on the run, Calina's had been influenced by her father form the moment she was awoken. Always there, lurking in the back of her mind, for her to call upon for advice when she needed. As Calin started to push into her late teens, her desire to rebel against her mothers wishes proved too much for anaya to cope with. Calina's yearning for friendship and desire to be free of the shackles her mother placed on her led to a heated argument with her mother, after which, Anaya had her shipped to Panatha. Here she would learn the dangers of allowing her pride to get the better of her, and she would learn how to bend to save herself while Kaine did his best to break her.

After almost a year with Kaine, Calina was returned to Anaya, calmer though while her mother had her back turned, Calina was conducting research and befriending the crew. Luke Hawkens, a pilot whose gambling debt had earnt him some time in Anaya's servitude, took a liking to the young Calina, coming to look upon her like a younger sister. Helping her in her research and teaching her to fly, he let the girl fly them to Garn in pursuit of a legend by the name of Rur and his soul snares.

Here, she discovered the ruins of the Temple of the Order of the Terrible Glare. Exploring the ruins she found a door engraved with the tale of how Rur had lured his victims. While exploring the Ruins, anaya learnt of her disobedience, coming to the planets surface and reprimanding Luke. Hearing of his capture, she abandoned her exploration and return to the surface. Furious with her betrayal, Anaya slaughtered the guards she had brought with her, and murdered Luke. While his death was devastating to Calina and a stark reminder of who she was playing games with, Calina vowed to avenge him.

Obedience, however was paramount until the moment was right for her to strike. When the Madalorian’s rose and declared war against the Republic, Anaya sent Calina to parlay with their Mandalora, @Ra Vizsla, Vizsla however had declared war on both Sith and Jedi and as such, Calina was tossed into a mountain prison. Here she remained for several months until [member="Velok the Younger"] was able to secure her release. Calina, though furious her mother had done nothing to attempt to free her, returned to her mother’s side. As she tightened her grip around various aspects of her mothers company and was handed more and more responsibility, Anaya became lax in her watching of her. Calina learned of her mothers plans to kidnap Mara Merrrill in order to convince her father to steal the vault of trihexalon that was believed to be concealed beneath the Omega Tower. Calina reached out to [member="Sarge Potteiger"] and warned him, and found herself an ally in the process. Her warning, however was too late and Calina’s chance to kill her mother was stolen by [member="Jorus Merrill"] and [member="Mara Merrill-Valkner"].

It took several weeks for Calina to overcome her initial rage that such an opportunity was stolen from her and to talk herself out of the idea of some ridiculous quest for vengeance for a woman she despised. She returned Jorus’s saber to Mara and in opening up to the girl found herself in a new role, and with, perhaps, a new friend.

Calina took herself to the Sith Empire, and knelt at [member="Darth Carnifex"]’s feet claiming to serve him. He took her back once more as his apprentice. From her position at the Sith Emperor’s side she was able to feed intelligence back to Mara regarding the Empire, however, Carnifex suspected her and to test her, was careful to tell her nothing fo the plans of the Empire to Join the Mandalorian’s in their assault of Utapau. Calina was furious, not only did she have to contend with the very culture she had grown to hate, but she had failed Mara.

After the war, Mara and she reconnected to deal with a Mandalorian prisoner, laying a false flag in an attempt to sever the alliance between the sith and the mandalorians, and became an accomplice in the murder of Malika Mantis, a high ranking General of the ME. Leaving ORC space and returning to her Master, Calina was called to Mandalore where the after affects of her and Mara’s work were coming to a head. Due to the protection of ysalamir, Calin was unable to communicate directly with Carnifex and opted to land her ship outside of the city Sundari where an unnatural storm was accumulating. In reaching out to investigate, she was warned by [member="Ember Rekali"] that they knew of her betrayal and fled the system.

With the help of [member="Willard Jamaane"] she was able to rebuild her life in secret on Coruscant. Staying off the radar required severe facial reconstruction and careful honing of her skills in order for her to blend into her new life in the Walk. While hiding, she grew in power, and her boredom has begun to grate at her. Calina needs a new goal, a new destination, something, this time, that she will not fail in.

Character Bio
Very interesting. Excited to see how this character progresses.
You must log in or register to reply here.