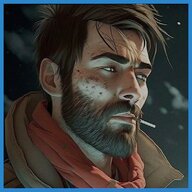 
BIOGRAPHY: Cale has lived what would be considered a standard Jedi life, he was born to a couple of farmers on Naboo and after he began to show that he was force sensitive, the Jedi took him in. From there he was raised alongside the other younglings, awaiting the day he would finally be assigned a master, luckily for him, that day has come.

After training under Sky Kerberos along with five others Cale became a Knight when he turned 17 after two years of training. During his time in training he journeyed to Illum and constructed his sabers.

One month into being a Knight he felt himself called to Mustufar by the force, he went there to discover Marek S'hadar, a life support bound Sith who happened to be his twin brother. His world was rocked, he learned he was actually from Coruscant and had been split form Marek at birth. He then preformed his duties as a Sentinel for four months in the outer rim, having no contact with other Jedi.

As years passed Cale trained his first padawan and as of recently began to train his second, a force sensitive Mustufarian.

http://starwarsrp.ne...ry120306-Begins, and ends training to Knighthood

http://starwarsrp.ne...try120300-First visions of Marek as he learns how to properly meditate

http://starwarsrp.ne...17-Participates in space battle over Metalorn, takes his first life from the cockpit of his A-Wing

http://starwarsrp.ne...157066-Finnally meets Marek, uncovers the truth of his real family

http://starwarsrp.ne...on#entry170088- During his four month period in the outer rim, journeys to Tantooine to try and arrest RC-212, fails to do so

http://starwarsrp.ne...y171291-Returns to the Temple on Coruscant

http://starwarsrp.ne...ry185967-Fights the zombies hordes of the "Harvesters" on Coruscant