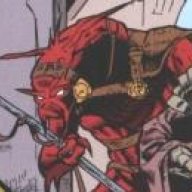 STRENGTHS AND WEAKNESSES:
(+) (Lightsaber Combat) Brutus is one of the most aspiring Lightsaber users in the Sith, throughout his own rank, Apprentice. This gives him an advantage in many battles whereas he can overpower his opponent both with tactical skills, strength and his superior maneuverability with a Lightsaber.
(+) (Strength) Brutus is a very strong man for his age, and is often seen working out with his strength. This gives him a minor advantage in battles as he can overpower his opponent if weaker than him. And could lead his opponent to death.
(-) (Lesser Force User) Lesser Force User means that at the current stage or even permanent, Brutus will never hold a strong affinity to the Force and is rather weak in it. This means that he can not perform a Force Power as good as most.
(-) (Background) Seeing his mother being slain, his father being slain only a few years after his own birth by Republic troopers. Only having this mentioned before him fills Brutus with rage and he come a rare brute that can take down many in his path, but often leads him to stupidity and becomes his fall or a major injure factor.

APPEARANCE:
Brutus is a very large Massassi, even for his age. Standing at the height of 5'11 and weighing in at 11 stones. He has a very maroon red skin color and his eyes are a matching color of blood red. Brutus also has a scar on his right cheek form the Dark Harvest crisis when he escaped from Republic troopers and a plasma blast sled the cheek of his.

BIOGRAPHY:
Brutus was born in the Korriban system in 837ABY, one year after the Dark Harvest crisis that spread through the galaxy. Raised amongst Sith and inducted to the Sith order already at a young age, Brutus knows nothing else but being a Sith. Which also comes together with him being a Massassi. Brutus is currently studying the two forms Niman and Shii-Cho, and Sith Philosophy to make the better of himself within the Empire and the Sith.

SHIP:
None acquired as of yet.

KILLS:
None killed yet.

BOUNTIES COLLECTED:
None acquired yet.

ROLE-PLAYS:
Non made yet. Welcome, dark child.
You must log in or register to reply here.