Bounty on Oppressor of Abregado-Rae, HK-36 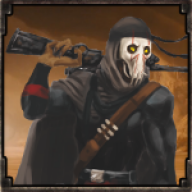 Your screen flickered before the familiar image of dark armored Guildmaster of the Bounty Hunters' Guild appears on the screen, signalling that another news transmission was about to be transmitted
"Greetings, Hunters"
The Guildmaster nodded before looking down on the datapad in front of him to read off the announcements, his face as always hidden behind black featureless mask
"Recently a bounty has been posted on the rogue bounty hunter HK-36, made renown in the Guild by his capture of Dreadpirate lord RC 212, leader of the Deathwatch. The droid has been recently made dictator of the subjugated world Abregado-Rae by his Omega masters. He is also known for poaching ropos during the Omega's sacking of Hoth and taking them from their native habitat. The Guild recognizes him a threat to our profits and existence, as well as existence of organic life."
The Guildmaster looked up at the camera
"Extreme caution is advised, and good luck, it is time we plucked away that leech before he takes away all of our business."
The Guildmaster nodded then, signalling it was the end of the news broadcast
"That is all."
and the transmission shut off
You must log in or register to reply here.
Share:
Share
Menu
Log in
Register
Install the app
Top