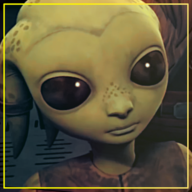 Copied from my post in the original Primeval faction, because I can never find it when I go looking for it in the archives.


THE PANTHEON​
.: SARGON
Sargon is literally nothing, and rather analogous to a nihilistic view of what the universe was like before the Big Bang. The Primeval view of the Big Bang is essentially that it was the moment in which the Three Creations of Sargon were made. There is no gender associated with Sargon and the god is basically a personification of nothing. Sargon could be construed as a form of Chaos, the primordial god from the Roman religion.

.: NOGRAS
Nogas is the first creation of Sargon and is associated with the female gender -- making her the only Primeval goddess.* She is the source of all light, and the caretaker of Sargon. She could be viewed as having elements of both the Greek Apollo and the Norse Baldur, or Dellingr (in being the personification of the dawn). She is known as the Starmaker.

* only Primeval goddess in what's understood to be the main or central pantheon of the religion. Local practice or different sects may add or view the gods/goddesses different, similar to Greco-Roman practice.

.: BALAGOTH
Balagoth is the second creation of Sargon and is recognizable as being the god of Death, but death in the Primeval takes on many of the attributes of the death card in tarot. That is, Balagoth is the god of chaos and change, not the lord of souls and the underworld. Part of the reason for this, is that the Primeval is a religion that believes in reincarnation. Balagoth could be viewed as the Primeval equivalent to the Norse god Odin, thought certain attributes of Loki would be equally applicable. Balagoth is known as The Dead One.

.: HALRORMALENTH
Halrormalenth is the third and final creation of Sargon. He is recognizable as being the god of Creation, but is interesting for the fact that its understood all of Halrormalenth's creations are inherently flawed. This is the Primeval explanation for mortality or entropy, as Halrormalenth is equally the creator of both man, plant, animal, or metal/stone/ore. Because he is a creator, he is the god of sexuality, fertility, and birth -- making him a Primeval equivalent to both the Greek Eros and Demeter, as well as the Norse Freya. He is referred to as The Broken Creator.

COMMON PRAYERS​
The Articles of Faith
"I believe in Sargon, the Tongueless Speaker. The one who separated shadow from darkness.
I believe in Nogras, first of Sargon, the Starmaker. The light from which all other light was made.
I believe in Balagoth, second of Sargon, the Dead One. In his shadow, that which is corruptible shall be reclaimed.
I believe in Halrormalenth, third of Sargon, the Broken Creator. His voice is the evidence of things seen and unseen.
I believe in the Primeval, the Host Lord, and the words of the Prophet. I wait for the Reclamation, when the stars shall give up their dead and all things will be re-made."

The Rosary
Hail Nogras, full of light. Blessed are you among Creation and blessed is the light of your stars. Holy Starmaker, light the way for we who dwell in darkness, now and at the hour of our death.

THE LEXICON​
​
.: Delos
A dwelling which contains a sacred library as well as a place of worship for the Primeval. May be dedicated to the whole pantheon or specialized in the worship of a particular god/goddess. Usually tended by a pontiff, who may also be assisted by one or multiple prylars depending on the size of the congregation. May be open to the public or devoted to a particular monastic/religious order. May be similar in design/construction to Ancient Egyptian temples, and frequently have roofless sections open to the elements in order to worship Nogras. Also referred to as a temple.

.: Eleusis
Graveyard, usually associated with either a delos (Primeval temple) or a kirk (Primeval shrine). Often contains crypts and/or mausoleums in addition to graves for physical internment or memorial walls for cremation urns. Funerary practices may be similar to the Ancient Greek practice. May also refer to a House Shrine, located in the residence or ship of a Primeval adherent, which may frequently include reminders of ancestors, heroes, etc.

.: Kirk
A shrine or small dwelling intended as a place of common prayer by Primeval believers. Larger kirks may have a pontiff, but most are tended to by prylars. These are often similar in design to Japanese Shinto shrines, in that the area around the shrine is mostly landscaped as a meditative garden and there is only a small structure for common or individual prayer. Also referred to as a shrine.

.: Reclamation
A public proclamation and gathering that serves to proselyte or bring new members into the faith; or serves to re-affirm the faith and belief of the believers. From 'revival' in Protestant Christianity.

.: Reverie Chain
A loop of string or wire, on which small stone, metal, or crystal beads are suspended, with a larger crystal at one end of the chain -- usually in a shape representative of an icon of the faith. From the Rosary in Roman Catholicism. Refer to the Reverie Crystal entry in the Codex for the most common crystal used in the icon. Also referred to as a Chain of Memories.

The beads on the chain represent different types of prayer, with the normal order or progression being
1) a supplication to Nogras
2) a prayer to Balagoth
3) a meditation on Halrormanlenth.
Upon arriving at the icon at the end of the chain, a libation may be performed as a form of offering, if available.

.: Pontiff
Reverend or Imam. A minister of rank or prestige (bishop, "the most right reverend", etc.) having achieved recognition among the religious orders of the Primeval. Capitalized when used as a title (e.g. Pontiff Kel-Ur)

.: Prylar
Pastor, Monk, or Shaman. A lower ranking minister of the faith, usually not formally educated but apprenticed into a monastic or religious order. Capitalized when used as a title (e.g. Prylar Jorek)
You must log in or register to reply here.

Theo and Boo's home on Kashyyyk