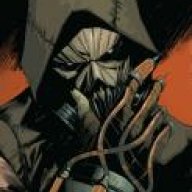 The winds were ferocious when you were fifty stories up, they whipped back and forth with no remorse, when you were this high up Mother Nature was not your ally. However, the people who owned Vyseroy Banking Group had produced a crowning achievement in this building, quite literally. They had designed it so the roof had twenty-five plasteel points erupting from the otherwise slender and pristine building, the points, from the ground, appeared to be a crown. They even went as far as to adorn the points with a special coat of paint that would glisten in what little sunlight the commercial world of Muunilist got.

The winds were partially blocked by the crown, however Mortivious’s hooded cape still twirled about in the breeze, he thankfully decided to leave his heavy robes at the temple, Alaxander needed all the dexterity he could afford. Equipped with his basic lightsaber and understanding of the Force, the apprentice awaited his target. He had been sent by his master to duel against a Knight, simply to test his abilities. Croix half expected his master had sent him on a suicide mission, however the other half of him knew that his master knew he would be able to find some way to live.

The battle would be pretty difficult, there was a decent battleground, though littered with wires and some antennas, it was mostly used for secret duels by the Sith, ones they didn’t want to get their hands dirty for orchestrating, though Mortivious had no idea of that. The roof was pretty sound and the ‘crown’ would be very difficult to blow through, so falling to their death was very unlikely, and usually frowned upon…

Character Bio
Walking through the vicious winds was a six foot two inches mechanized nightmare. Mechanical breathing was the only sound coming out of the Sith Assassin that was Marcus Faust. He stared down @[member="Darth Mortivious"] with indifference. He knew what the apprentice was here to do, he wanted to be tested, and tested he would be. In utter silence Marcus' clawed hand grabbed one of the many lightsabers adorning his belt, this one being his personal lightsaber. Assuming a Djem So stance the crimson blade sprung to life as Marcus silently awaited Alexander to begin his attempt at besting him. It wasn't going to go in his favor obviously, he was outmatched in nearly every aspect, but unlike many had done to him, he wouldn't just take the man down with force attacks, no he'd best him in a lightsaber duel, simple as that.

Alaxander’s opponent approached his body more of a mechanical graveyard than running organic matter, his slate grey design lit up with a brilliant crimson hue as lightsabers engaged. Both duelists extended their lightswords, but Marcus didn’t attack first.

A crack of lightning raced across the sky a couple miles out, soon there would be a storm to fight through, but for now there was relative peace atop the steel structure; Mortivious would have to take advantage of it while he could. A respectful bow was given to Marcus, it would be rude to not acknowledge his rank before the duel. “Let us begin.”

Mortivious started to slowly circle the Sith Knight, hoping to draw him to attack first, giving Mortivious a chance to study his battle strategy.
@[member="Marcus Faust"]

Character Bio
Marcus gave @[member="Darth Mortivious"] a nod and began circling him as well. The crack of lightning only made him smile, the expression tugged at burned flesh but he did not care in the slightest. The waiting would soon be over as Marcus called on the force and used it to give him a burst of speed to close the gap in between the Sith Knight and Apprentice.

He slashed horizontally across Alexander's chest, lowering himself as to a void being bisected by the apprentices blades. The blow was quick and powerful, and it was only the start. Raising himself up he swung low, at Croix's leg, the brought his blade up, to slice her vertically as well. For the sake of the apprentice, he hoped the man could block a few strikes, otherwise he'd be dead in about a second.

It wasn’t long until Marcus attacked, knowing he had an advantage he likely felt it the right thing to do. Luckily, Mortivious had sparred with apprentices before and had seen the effects of Force Speed, however the downside was during the training exercises there were no real lightsabers implemented, instead they used a high powered training saber. The stakes were higher, but perhaps that was the extra push Alaxander needed to access his potential?

The attack seemed a blur, but somehow the warrior's mind was able to process it at lightning fast speeds, faster than the racing blue lines tracing the outer skies of the Muunilist city. The red saber was quick to meet Marcus’s on his downward slash. It was time for Mortivious to show off some of his training, in a split second after the first block, when Marcus was raising himself up again, Mortivious used the Force to help him jump over Faust’s blade, twisting his body over Fausts’s, evading his attempted sweep.

He didn’t have to evade the third stike considering he was in a different location, just to the right of the Sith Knight. The tall Sith apprentice then spun himself around, pulling all of his muscular weight behind his lightsaber, hoping to strike the Sith Knight’s back.

Character Bio
Marcus couldn't help't but growl as the apprentice leapt behind him and made a strike at his back. It was a good move on the apprentice's part, but not quite good enough to strike the seasoned Sith Assassin.

Flipping his saber into a reverse grip and shooting back his arm, his blade caught @[member="Darth Mortivious"]' saber. Lowering himself and freeing the blade, Marcus spun around and followed through. The strike, if successful, would hack clean through Croix's legs and leaving a stubby, wailing man on the roof of the building, and Marcus could get inside.

Mortivious's senses were greatly heightened ever since his master had taught him how to feel the Force, it allowed him to fight like a real Sith. This allowed him the basic reflexes of all Force Users, so when Marcus's blade came in for another sweep attack, Croix's body knew to jump before the blade hit him.

His reflexes were't quite fast enough it seemed, his cape getting cut off clean right below his foot, missing his feet by inches. The apprentice decided to use the momentum to roll away, getting around five feet of distance between the two combatants. In a flash he was back on his feet, ready to fight. A bloodthirsty cry escaped the apprentice the same time a large clap of thunder sounded in the distance, the two becoming one in a fit of dark fury. Alaxander used all his might to leap in the air for Marcus, hoping to slice him in half with a very powerful overhead strike.