Blood on the Sand (Nicholas/Daxton)

The two warriors stalked one another in circles around the sandy training pit. The ground shifted under their sandal clad feet as their blades hissed softly in the cool night air. Above them, a dozen stars shined brightly but neither bothered to notice the beauty around them.

Breaking into a run, Daxton feinted to the right before rushing to the left to flank his target, the single red training blade aimed squarely in thrust to bury itself in the younger man's meaty thigh. 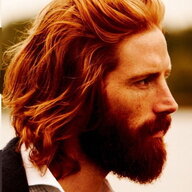 Character Bio
He'd been waiting for this moment.

They had spent the last several minutes stalking each other, walking in circles in the sandy pit, just waiting for the other to make a move. Daxton had made the mistake of doing it first, and Nick's patience would pay off.

As Daxton tried to flank the young man, he raised his duel bladed training saber, the blade's red hue resonating in the warm air, and blocked the thrust quickly, before the man showed an incredible athleticism as, after he had replaced his rather heavy Mandalorian armor with a special armor given to him by his old acquaintance Circe, he was able to move much better then he had under his heavier Mandalorian armor, he leaped into a cartwheel in mid-air, before attempting a slash at the upper end of the right side of Daxton, trying to catch the Master by surprise.

The tactic almost would have worked had it not been for the Sith's left gauntlet, suddenly trusting forward to intercept the blade. As lightsaber met steel, it should have injured Daxton, except the blade suddenly fizzled out, completing the punch Daxton sent a bolt of Force through his fist to strike at his foe.

"You underestimated your target. The point of using a dual blade weapon is to attack, attack, attack. This is no duel of honor, you must keep pounding as long as your enemy is still standing. Every second you keep him on the defense, is another second you can find a way to kill them."

Dropping his weapon in half guard stance, he commanded his apprentice. "Come at me again!"

Character Bio
He grinned a bit, listening wisely. He took the different approach, and went on the attack completely.

Attack, attack, attack. Left, right, stab, slash. Unrelenting, using both sides of the saber, Nick continuously jabbed and slashed at Daxton to try and make himself an opening.

"Better!" Daxton commended his apprentice, "Now remember that your blades are not your only weapons in a fight. Many duelists have fallen into blade frenzy, where all they think of the weapon in their hands, they fail to see the many weapons just lying in the environment as well as the other not so obvious weapons of the Force."


To illustrate, Daxton launched a thrust to the apprentice's shoulder which alone could easily be deflected and parried. But as the strike began, he force punched with fist of pure energy into the other man's kidneys, throwing him off guard from the pain of the strike, letting his blade snake in only to stop an inch from flesh to illustrate his point.

"Jedi, are especially vulnerable to this, as they only think with their sabers. Learn to exploit the weaknesses of your foes to your advantage."

Character Bio
Nick listened carefully as he took a breath, nodding after being struck twicefold. Lesson learned, for sure.

And to illustrate that he was listening, Nick quickly threw several strikes Daxton's way with both ends of his saber, not giving him much opportunity to attack, but they were easy enough to block if he put only his focus on the blows.

With Daxton off guard, Nick moved his saber to the side slightly to make Daxton think he was slashing at a different part of him. And he was right, he did do so, but as the strike began he lifted his foot and nailed the Templar Master with a swift boot to the side of the head, catching Daxton off guard and allowing him to slash at his side, stopping an inch from his flesh.

Nick smirked a bit and backed up out of respect to allow Daxton to regain his composure. The lesson had been taught, there was no need to keep attacking during a training session after that, until Daxton made it known that was the case. Sure, he could have attacked the Master right then and there to assert himself when Daxton himself would think Nick was going to be pacifistic, but why would he? He held no ill will toward the man, and he proved more useful to him alive... Besides, what was a swordsman, Jedi or Sith, without a bit of honor? It was in their roots, no matter the path they took.

Nick waited for Daxton to either end the lesson, or strike at him again if he had anything else to teach.

"Good you are learning." The Sith Master said as he shook his head to clear it of the stars lurking on the edge of his vision.

Switching off his blade, he continued, "Excellent use of your arsenal, although a spike on the edge of the boot would have made it more effective. There will come a time when you do not have your weapon at hand, that does not necessarily mean you are helpless. Observe."

Channeling the Force into the ground beneath his feet, he visualized the sand taking shape of his fist, and it obeyed as a giant sand hand burst from the ground and seized the apprentice, pinning his arms to his sides and lightly squeezing before releasing him a shower of debris.

"Everything around us is comprised of the four main elements. Learn to tap them and manipulate them to your advantage. Do you understand, my apprentice?"