Intent: This melee weapon is designed for close combat with force users, Mandos, and pretty much any other kind of threat a soldier might find on the battlefield that cannot be taken out with a blaster. This weapons intent is to be used against lightsabers, blaster bolts, and also be used as a crippling weapon. Disabling any target it may hit. This weapon will be used by special forces and assignments that will require extra protection.

Material: The Vibro-Electric blade is pretty much made from various materials known to deflect and parry the blow of a lightsaber. This the blade itself is made of Cortosis-weave, a material normally used to create Electrostaffs and Vibroblades. The hilt is made from this material as well. But each blades hilt has a special component that gives it it's overall effect. The weapon has a total of two identical blades but the component within the different hilts of the two blades are what gives it its effect. One hilt of one blade is fitted with a compact ultrasonic generator, causing the blade to vibrate as a Vibroblade. The second swords hilt is fitted with a electromagnetic pulse-generator. Creating a highly powerful electrical surge for the second blade. When the blades are separate they both have their own effect as the original weapon would hut the very end of each hilt is a connector. And when both ends of the blades hilt meet and lock together both blades come alive with a visible electrical stream while the vibro is active in both blades as well. 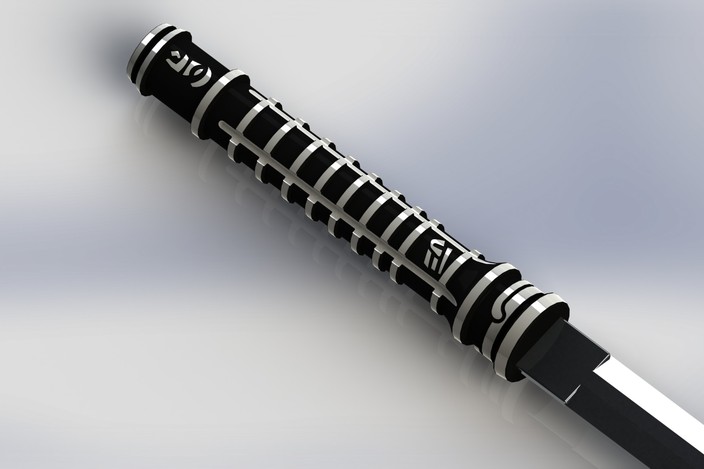 Description: The. Vibro-Electric blade is designed to take on almost any organic target with high efficiency. Anyone with the basic knowledge of a sword can use this weapon and it is resistant to almost anything as far as blasters or lightsabers come. They obviously cannot withstand extremely powerful explosions like a rocket launcher or a boulder falling on it. It is pretty much as strong as a Electrostaff with the proprieties of a Vibroblade. Ultimately the strengths are strongly geared in close combat with organic beings. The slightest cut to any part of the body can deal devastating results. The Vibro part of the blade will turn this cut into a large gapping and/or almost fatal wound depending on the injury and location while the Electromagnetic pulser sends a highly powerful electrical surge through the whole body.

When used I'm combat these look just like any other swords and can be used separately for their original purpose. But once the two ends meet both of the purposes bond into one creating the Vibro-Electric blade. The hilt is designed not to let any of the electricity meet the actual components of the hilt but instead run straight though to the blade. Making it appear to have electrical streams traveling along the blade when swung.

Character Bio
Hey there @[member="Subject 13"], let's get to work on this bud.

From what I'm reading you're making two swords that you can carry, with two different functions. Both of these blades are lightsaber resistant, and they can be connected at the base for a synergistic effect that makes a weapon to fight against those who wield lightsabers. From what I'm getting it seems you looked at the electroblade training saber entry on wookieepedia as well as the vibroblade, and the Echani cortosis weave variation of this. So lets get into what needs to change.


It seems you were going for a cool weapon, but you've written it in a way that makes this seem ridiculously powerful with no weaknesses. Canonically this weapon doesn't work, and that's a lot of equipment in the hilts and the swords at that point would become very heavy. Thus making their weight an issue, not to mention joining them together in combat.

If you want to make this a cortosis weave pair of swords that join together and somehow have an electrical current running through them without electrocuting you. We can go down that path, or we can make this a custom echani double blade that splits apart and you can keep the vibro blade parts. As this stands though, this submission will be denied for many reasons, and substantial edits are required to get this approved. Please look at the multiple changes I have asked for, the paths I have offered and let me know.

Character Bio
@[member="Subject 13"] Be that as it may, this submission isn't moving until you make the requested edits. This doesn't meet the factories standards nor am I comfortable approving this.

Character Bio
@[member="Subject 13"] Have you done anything to this sub besides change it's name?


Because as it stands if not there is no reason to resubmit since your original sub has survived.

Character Bio
The original submission was lost so i re posted it but with another title.

Character Bio
I'm looking right at it, your sub was in July so it's safe. I'm archiving this as that is no need for a duplicate of it.
You must log in or register to reply here.
Share:
Share
Menu
Log in
Register
Install the app
Top