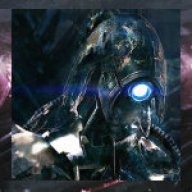 Nightmares were common for her. 'Her' being the giant known as Kraigmiir Hijiin. Many years had been spent in a large compound, locked away beneath Hoth's surface, and being experimented on. Sith Alchemy had twisted her, warped her every feature until she was a monster. Though many memories had faded, they still haunted her, usually in her dreams. Now was one of those times. Krag moved around in her sleep, muttering curses in various languages. It was not until her alarm blared out that she stopped, finally free from her mind's prison.​
​
Groaning in annoyance she stood up, reaching nearly nine feet tall. The ceiling was built for her people and there was still another foot above her head. This was her family's old home, created just for the Null clan. Humans and similar species often felt small in the building, some not even able to use counters effectively, or sit in chairs without assistance. But to Krag, it was fine. It was normal. No one in her family still lived in the house, all having died or left Hoth. They had all assumed she was dead, and none had tried to contact her once she escaped the lab. After all, she had disappeared decades ago... It didn't matter anymore. She was alone, and that was fine with her.​
​
For a few minutes she changed, putting on her armor and a cloak. Today was another hunting day. While the settlement didn't rely on her for food, her assistance did benifit them a lot. Some of the beasts she gathered were sold, while others were used to make furs or used to feed villagers. Many found her appearance frightening, but they appreciated her work nonetheless. Without her they wouldn't have nearly as much money, and would have to work a lot harder to get supplies.​
​
Exiting the house she stepped into the wilderness, ready for the hunt.​
@[member="Flint Dexen"]​

Flint had no fething idea why he was on Hoth. He didn't want to be here, that was for certain. It was way, way too cold for him. How people even thought of settling here was beyond the Jedi Knight's midi-chlorian mind. Why was here? He had crash landed on the icy planet. His Jedi starfighter was in no shape to travel, and Flint got a feeling that with the current broken engines, his starfighter would turn into space dust the moment it tried to make a hyperspace jump.

The Jedi Knight scanned the distant horizon. There appeared to be a settlement, or a village. Whatever it was, it was possibly the only civilization for miles around. Flint thanked that he had crash landed so near to the town, otherwise he may as well have just frozen to death. Flint draped his cloak over him, and slightly shivering in the sheer coldness, the Jedi made his way into the village meeting the curious gazes of the villagers as he entered the settlement.

It was unlikely that they saw visitors often, and Flint wondered if they even spoke Galactic Basic Standard.
"Freedom from a world that was so quick to chain and so quick to punish".​

D
Winter of Some Kind