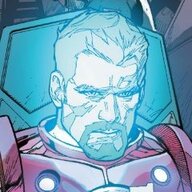 Character Bio
Intent: To give non-force wielders like The Shadowlord a small edge over lightsabers and force wielders in general
Development Thread: (Not mandatory on creation, but helps give insight to a submission and shows effort. If not included, depending on the submission, a development thread might be asked for before final judgement)
Manufacturer: NearCo
Model: N/A
Affiliation: The Shadowlord
Modularity: ... No
Production: Mass-produced
Material: glass, metal, and a mood altering stimulant
Description: A toxin that, when enough adrenaline is exerted, increases the imbiber's all around power and ferocity 10 fold until either the user is dead or the adrenaline is all gone, whichever comes first. The drug works rather like a D&D Barbarian's rage, as in it increases the durability, rage, and power of the user, however, it can only be used once per stim. When the drug takes effect, it makes it harder to tell who is friend and who is foe for about 5 minutes, and when that effect is over, the user gets very tired, which if the situation that this was used during was an ongoing combat scenario, can be devastating.

Character Bio
Hey there bud, I'm going to throw a few things out there to be addressed before this can be approved ok?


Please take what I have said and modify this submission accordingly so we can continue on, or I will deny it if left as is.

Character Bio
I'm taking what you said into account, but I need to think of more things, seeing how I kinda rushed a little when making this.

Character Bio
Moving this to pending.