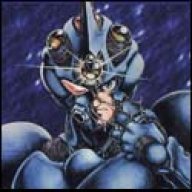 Strengths: Azrael has not aged since the incident that flung him into the far past, he remains a healthy 16 year old. He has had millennia of life experience and is knowledgeable on a variety of topics. Weaknesses: The universe is a large place, as such, The Draconis Empire does not have the reputation of some of the other galatic powers. Azrael is constantly being underestimated because of his youthful appearance.
Appearance: He has white hair and blue eyes. He is physically fit, young looking and healthy.
Biography: Azrael was born in the Tapani Expanse, to a father from House Pelegia and a mother from House Mecetti (They had secretly wed). He lived with his fathers House (House Dragonstar is a minor noble House of Pelegia) due to the ongoing feud between House Mecetti and House Pelegia. He had been training in the Force since he was two. At the age of four, he was headed to the Jedi Temple on Coruscant when his ship disappeared (It was believed that the ship was attacked by pirates from House Mecetti). His ship was badly damaged and left adrift until it crashed on Saurbi 7/5 (He survived by being put in a crude form of carbonite by the crew). When he was found by natives of Saurbi 7/5, he could not remember anything of his past and spent the next ten years learning the ways of the Jensaarai. He has created his armor and double-bladed lightsaber, to complete the trials of the Jensaarai. On one of his rare offworld visits (Jensaarai do not leave their world very often), Azrael ran into a representative of House Pelegia. He was told that he was a member of House Dragonstar and that he was believed to have been killed all those years ago. He returned with the House Pelegia representative after consulting with xxxx (The leader of the Jensaarai). He learned what had happened all those years ago. His mother had been killed by her own brother for having relations with a member from House Pelegia. His father avenged his wifes death by killing her brother. House Mecetti sent assassins to kill his father and Azrael. His father decided to send Azrael to Coruscant to learn the ways of the Jedi. Ship: Dragonstar Forge Industries Talon-Class Starship (Advanced Corellian Engineering Corporation YZ-900 Freighter)
Kills: 0
Bounties Collected: 0

Role-Plays:
You must log in or register to reply here.