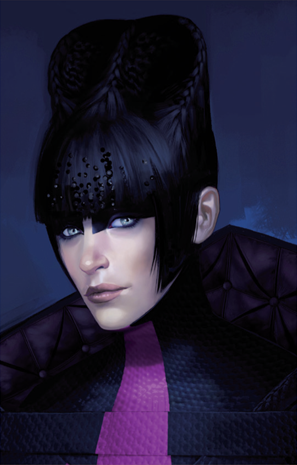 Appearance:
Astrid is a vision of beauty, as was intended; to capture and hold the attention of an audience. Everything was specifically designed, from the makeup, to the outfits and the sometimes outrageous hairstyles. All of its done to garner attention, to get the viewer to remain affixed watching as the young woman spoke. With medium length black hair, usually held up in one style or another. And makeup applied to accentuate her pale eyes. Beneath the outfits, is a body formed and hardened by a former love for dance and gymnastics, something that is still continued to this day. But barely anyone sees Astrid out of her work, and as such these little things are left in secret.

Traits:
[ Strength ] Light-footed - Astrid might not be a fighter, but she can be quick on her feet. With a background in dance and gymnastics, she has mastered that particular art. Especially when wearing a pair of heels.

[ Strength ] Secret Weapon - In the wake of the events on Jaminere, Astrid made it a priority to know how to defend herself better. And what better way to do that, than making use of her newly acquired legs.

[ Debatable ] Perfectionist - Whether its work, her appearance or something else, everything has to be perfect in Astrid’s opinion. From having the editorial staff repeatedly go over a newscast script, to ensuring everything from her makeup to her outfit is pristine for the camera.

[ Weakness ] Non-Combatant - She can fire a blaster, and throw a few punches. But Astrid is not the type to get her hands dirty unless absolutely necessary.

[ Weakness ] Pyrophobia - In a more recent development, Astrid has become afraid of fire. History:
Not a whole lot is known about Astrid, aside from the fact she was an unknown before her arrival in the Sith Empire. She had a politician as a father, and an actress for a mother. The two had met one another when the former had watched one of the latter’s plays. A chance meeting shortly after was the only spark needed for things to blossom. Astrid was born within the year after the pair were married, and for the most part she had a decent childhood. The biggest issue was being split between her parents, both having very different responsibilities that pulled them in opposing directions. But it did allow Astrid to focus as she shadowed either parent during their respective job, eventually taking part once she was older. Albeit, her father had refused to get her involved in politics, ensuring she never had a public presence in that side of his life.

Astrid was twelve when her world was tipped upside down. She had come to visit her father, only to find his residence was a crime scene. Suicide they had called it, but anyone who bothered to look would realize the truth. His death had come within twenty four hours of his latest debate, where he had been vocal against a particularly notorious gang and their connections to the opposing party. Fortunately her mother was quick in finding Astrid and whisking her away before anything could happen. Within the week, the family name was dragged through the mud with numerous allegations, a vast majority of which were fabricated.

They were left with nothing, forced out onto the streets. At least until Astrid’s mother made the decision to dig into her family’s past. Apparently there was a storied history in the criminal underworld, though several of the recent generations had opted to not really focus on it. The name held some notoriety, and it allowed for the mother-daughter duo to get back on their feet. Astrid of course tried to learn about that side of the family, but her mother refused to tell her and anyone else she asked were equally tight lipped.

All she knew was that the family name had been around for several millennia.

So, Astrid spent her teenage years travelling the galaxy with her mother. Learning the old trade and meeting all manner of people. From the lowest to the highest in the criminal underworld. To the more interesting characters, ones that had left a lasting impression such as [member="Daro Tarsi"]. But fate wasn’t going to be kind to Astrid. As she neared her eighteenth birthday, her mother fell ill.

The disease was quick, afflicting her within days. And yet Astrid’s mother wasn’t too surprised, as though she expected it to happen, to have her very flesh eaten away. She even remarked how bitterly ironic that it reared its head while they were working within the underworld. On her deathbed she had Astrid promise to ‘move onwards’. That the past six years were merely a stepping stone, to build up enough resources to leave their current lifestyle behind. It was her dying wish for Astrid to make something of herself.

And she did just that, but it took almost eight years for it to happen. Planet to planet, Astrid had searched for solid, legitimate work. She’d find a job here and there, but nothing that would last for long. Eventually she had ended up being hired on by a company, one that was looking for a news presenter. It wasn’t exactly something Astrid desired for her future, but the planet they wanted her moving to had plenty of opportunities. Little did she knew one would soon arrive in the form of the Sith Empire.
It just so happened that the planet in question was within the Empire’s plan of expansion. And not long after their occupation, did one of their agents come knocking on Astrid’s door. They were to present an offer, one that would pay well and provided her an opportunity she wasn’t likely to get any time soon. Someone within the Empire had liked what saw of her previous work. Astrid accept, how could she not?

Before she knew it, she was swept off her feet and taken to Bastion. There she had to acclimate to a new home, and a new city. What she wasn’t expecting however, was an audience with the Emperor himself; [member="Darth Carnifex"]. That in itself was a whole experience, the first time Astrid had actually met and talked with a Sith - the Dark Lord of the Sith at that.

From there, Astrid threw herself into her work. To create and develop a company that would eventually become SINN; The Sith Imperial News Network.

Character Bio
Reserved.
You must log in or register to reply here.

Reine Bisset, the Mistress of Blades
2 3