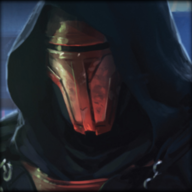 + One Hell Of A Pilot: Even before he was trained to use the Force, Aryn was an immensely skilled pilot. Flying since he was young, Aryn is more at home in the cockpit of a starship than anywhere else in the galaxy. An expert at flying smaller craft such as fighters or freighters, his time in the military has given Aryn enough know-how to be able to pilot much larger craft, with a few minutes, he can fly just about anything.Best in

+ Experience Trumps It All: For one of his age, Aryn has had a breadth of experiences with all sorts. While his official training is limited to the force, piloting and military tactics, his experiences have made the man particular adept with most weapons, fighting styles, and even history and diplomacy. Over time, Aryn has managed to become something of a jack of all trades.

+ A Cipher, Forming Bonds: Aryn is the practitioner of a particularly rare form of force bonding, having a natural talent for the ability. A natural leader, Aryn forms strong connections with ease, even to those who feel the force only faintly, at its full strength, Aryn can use this ability to subtly manipulate others, passively, it allows him to pick up techniques from those he is bonded with, and contact them with great ease, on a near-galactic scale.

+ It's All About Who You Know: First a lowly rebel, then a general and eventually one of the triumvirate heads of the Galactic Alliance, Aryn has made a number of connections in different circles across the galaxy. Though the man has made plenty of enemies in his time, he has plenty of allies across the galaxy, often more than willing to help provide the man with resources, work, or a place to lay his head.

- Nowhere To Hide: The innate ability that Aryn has for force bonding has one particularly major draw-back. Any practitioner of the force with any particular knowledge of Aryn can often feel the force within him literally calling to them. There is no particular limit to this call, and someone may use it to track down Teth across the galaxy.

- Losing's Tough: Jaded, the decimation of the Galactic Alliance at the hands of the Sith and the First Order destroyed any sense of idealism that Teth once had. Once devoted to protecting the light, and spreading liberty across the galaxy, Aryn has become fiercely independent, concerned with little more than his own survival.

- Sucker For The Good Guys: Disheartened as he may be, and selfish as he might have become, Aryn is forever good-natured at heart. At the end of the day, Aryn can usually be convinced into taking whichever route or plan is morally upstanding, more often than not to his own detriment.

Aryn Teth was born to the most influential noble family on Eriadu, the heir to his parents fortune and to the head of the Eriaduan authority. Aryn spent much of his young life wandering the harsh Carrion Plateau, owned by his father. Though his family was well-off, and enjoyed a number of luxuries uncommon among most of the Eriaduan population, their relative isolation to the more frontier and remote parts of Eriadu meant that Aryn had little exposure to the busier and more active societies common among city worlds such as Coruscant, and he had absolutely no exposure to the Jedi or other force-sensitive organisations at a young age, meaning his force-sensitivity remained a mystery throughout his young life.

Taking to piloting in his adolescence, Aryn began his flying where many good and young pilots do, with a T-16 Skyhopper. Spending much of his time in the cockpit of the airspeeder, Aryn progressively improve upon his abilities as a pilot, becoming involved in a larger community of airspeeder races held in the city of Phelar. As he grew older, Aryn began to yearn for the stars, devoted to leaving his home on Eriadu to become a pilot in his own right, yet his parents refused to permit such a dream, desiring instead that Aryn remain on Eriadu to follow in his families' footsteps.

Frustrated by his parents' restrictions, Aryn continued taking part in the Phelar racing leagues, progressively gathering the attentions of the underground element in Phelar. Over time, Aryn began to work in the Phelar underground, a getaway driver for thieves and messenger between crime bosses, all under the promise that one day, the organizations he worked for would provide Aryn with his ticket off-world. Yet, the longer he worked, the more Aryn began to realize his employers had no intention of granting him his wish, his skills had earned him a spot too crucial to their work for them to let him leave.

Plotting his escape, Aryn continued to work for the organization until he was close enough to the chief lieutenants of Phelar's criminal underground. Using that trust, Aryn snuck aboard a VCX-100 owned by the organization, stealing it and making his way off Eriadu. Before long however, Aryn was tracked down by the Organization and captured, dumped on Raxus Prime without any ship to rot and die. Wandering the surface of Raxus, Aryn eventually came across a damaged T-70 X-wing, along with a poorly functioning BB-unit astromech. Repairing both, Aryn made his way off Raxus and began to work as an escort pilot, eventually being tangled up with the Rebellion, and eventually the Galactic Alliance.

After joining the Alliance, Aryn rose quickly through the ranks of the military, and as his force sensitivity was discovered, he began to train in the ways of the Jedi. Launching through the ranks of the GADF, Aryn became a General shortly before the onset of the Great Galactic War. Involved at all the major conflicts throughout the war, Aryn was soon appointed to the position of Supreme Commander of the Alliance after the death of Nemo Ven and Zark, leading the Alliance's war effort against the Galactic Empire, the First Order and the Sith Empire.

It was in this position that Aryn initially came to particular prominence across the galaxy, and began to work closely alongside [member="Srina Talon"]. While Aryn had before encountered the man, he also developed a strong rivalry with the famed bounty hunter [member="Koda Fett"], facing off against the Mandalorian often enough that the two both shared a fair number of blows.

In the aftermath of the Sith's decimation of Coruscant, and the subsequent fall of the Galactic Alliance, Aryn disappeared to the Outer Rim, doing whatever he could to distance himself from the prominence he had once held following the subsequent domination of the Sith Empire and the First Order. He has since taken up a career as a mercenary of sorts, trying to remain under the radar while earning enough credits to stay afloat.

In the period following Aryn's exile into the Outer Rim, his homeworld of Eriadu suffered from a great deal of internal strife among the noble families over who would take the Teth's place as the rulers of the world. While Aryn Teth was a likely candidate, his name was smeared by the upstart Verrin Traske, who used Aryn's inability to save his parents during the Imperial attack on Eriadu, and his subsequent disappearance after the Sith's Endgame, to paint the man as a traitor.

Fight me.
You must log in or register to reply here.