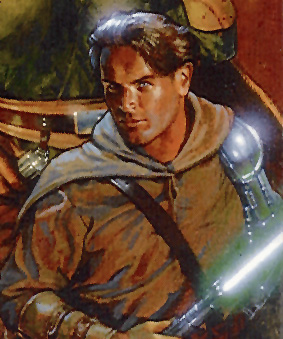 Self starter: He doesn't rely on others in the means of knowledge and bettering himself. When there is something new to for him get engage and grow, he will do anything to learn it.

Quick learner: He learns quickly from hands on experience and reading, when he fails at something he generally learns how not to fail at it again.

Honest: Very rarely when he does talk will he say something that he is not thinking, he sees lies as useless wastes of time and should only be used in combat or when need for infiltrations.

Persistent: Once he starts something he must finish it before beginning a second course of action, as such he will strive to do something to the best of his ability.

Kind: Arthur shows a high degree of kindness to the injured, weak, and to most people in general as long as they are not threatening the lives of others or that of life in general.

Respectful: He is both respectful to almost everyone unless said person is deemed not worth of his respect. He is also respectful of nature itself and the lives of others, putting neither in danger if there is ever an alternative.

Seemingly Emotionless: He acts logically and thinks analytically but in doing so he created a habit of looking like he is emotionless. This, though untrue and contradicts his very being due to his high degree of kind actions thus confusing himself when his actions do so.

Quiet: He very rarely talks for the sake of talking, and when he does do so he normally offends people due to his inability to understand that true honesty can sometimes hurt people more than it helps.

Hesitant: He is hesitant to make the first strike on anyone or anything, this allows a possible enemy the upper hand in a fight against Arthur.

A kind quiet soul that turns to violence out of need. He does not wish for conflict, but should any problem arise he will not hesitate to eliminate the problem, whether it be permanently or he shows mercy depends upon the one that is causing the problem. Furthermore, he spends his free time studying, reading or writing, he never has been a social one which left him with confusion over the kinds of social activities that he continually see others partake in. His expression is normally either apathetic, calm, or happy. He very rarely succumbs to anger or rage, though he is quick to become annoyed by concepts that he has no understanding of.

Arthur is a lean and light compared to many others of society and world around him, a few people even thought his thinness is due to a disease or that he wasn't eating but it is merely due to his routine and a abnormally high metabolism. His eyes are a deep blue while his hair is a short pale blond, which is normally unkempt unless in the presence of guests. His attire is normally made rather for comfort over the need to impress people, due to his constant reclusiveness in which he is reading, writing, or training with a blade. His hygiene is normally in good order and it is atypical for him to go without handling such. He is quiet normally, while also known to study those he meets down to to the last centimeter, both in demeanor and in personality. He is normally seen readying from a journal or other such literature, a fan of fables and poems of old. This is only possible due to his position, allowing him to shrug off the normality of those stuck in the militaristic society.

Arthur Hardrada was born twenty five years back into the ruling royal house, his mother and father the king and queen. Unlike his ancestors and especially his father before him he seems to have an innate Kindness towards others and a fondness of reading. This thus led to Arthur's replacement as the Heir over his much more 'normal' brother, a vindictive and cruel man that takes pleasure in the suffering of others. Born with the force though receiving no training his innate powers are put to use in subtle ways, giving him a slight silver tongue and allowing for otherwise odd feats seeing as how light he is. He spends large sums of times alone in the woods with few around and has bought several slaves before giving them virtual freedom due to a hate for the act of slavery, this has made him even more a target of ridicule but also allows for those who are slaves or in the lower castes to trust him.

You should Join the Templars! you would so match!

Come find me on my Isolated planet lol, maybe i will maybe i wont.

Character Bio
-;laughs a bit- Was kidding, no need to refer my char to any group, if someone likes him they will approach him on their own... if that came out offensively sorry.

@[member="Aelavin Dryearlylth"] Thanks you for leading young thuglets to our hood. You will be treated with honor and Gin&Juice upon visiting. I'd refer you to the Confederates because of the image, but it's been done already

@[member="Commander Calico CC-247"] I thought about it myself, but I already have one character there. If I do visit when I am older and allowed to then I hope those refreshments will be given Calico.

Character Bio
-blinks at the Confederacy- Hello Confederacy Characters, as i said i have not decided to send this char any one way yet, thats an IC decision i need to make.