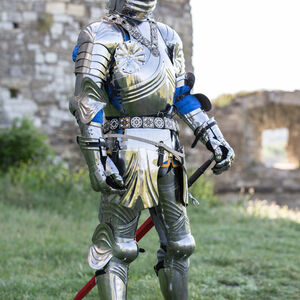 To an Aelozian, armor is a symbol of status, and pride. Each knight, upon completing training and being given their station, is rewarded with both a durasteel blade, and a suit of armor. This is no different for those who swore fealty to Lady Aya Clarke of Kalis. Each knight and Liege to swear fealty had already long since received their suits of armor, but upon hearing that their Lady had been pronounced by a trusted confidant as 'Saint', twelve members began the long journey to meet her, and join her cause. To better be suited for the worlds beyond their own, they opted for a single, simple modification to their armor, an addition of a personal energy shield system. This system would bring their own armor up to relative standards, and be perfectly suitable for whatever their Lady deemed their course of action.

In addition, most members with these armors also brought with them their ceremonial capes, none of which were quite the same. Each was a different color, or shade of the same few, and had a variation on Aya's family crest: A crimson eagle. Each variation detonated how long their houses had been in service to House Clarke, as well as incorporated their own family crest into the design. As such, at a glance these capes would serve as markings of fealty, though provide no additional benefits to the armor itself.
Last edited: Jun 28, 2020

Vora Kaar How did that get deleted?

Approved Tech Armor Of The Faithful