Are You Sure I'm Old Enough For This?

13. The age of an adult, at least in Mandalorian society. It wasn't even necessarily that people viewed you differently - it's just that you could legally do just about anything. You still wouldn't be drafted until age 16. And you still couldn't get married until 18. You still wouldn't be fully expected to do everything an adult would. At least, that was the experience Beth was getting. She hadn't even had her verd'goten yet. That may have explained some of it, actually. Of course, she wasn't exactly trained from the age of 8 as a child usually was. She wasn't even adopted into Mandalorian culture until Kaine had found her those, what seemed like a lifetime ago, 2 years ago. Was she really an adult, with or without a verd'goten though? Ultimately, it didn't matter - she had people who loved her, even after she was 13, 16, or even 18 and older.

With a sigh, she leaned against the entrance to the bar, waiting for Skosk to arrive. He had been her trainer, a friend, and a person who supported her in every possible way during some very hard times of her life. He was her best friend, her brother. As a clan member of Australis, he was literally her brother. The imprisonment of Kaine had affected him in his own way, sadly. In typical Mandalorian fashion, they decided to test Beth's taste buds with tihaar - a Mandalorian alcoholic beverage. Beth wasn't even sure if she could handle the taste - the smell alone was awful. She wasn't entirely sure what to wear to a bar. In either case, she wore a simple blue dress, her hair braided around her head as usual. She left most of her personal items at home.

Her mind drifted to her imprisoned father, locked away under the Sudari palace. She sighed. At least she was able to see him frequently. That was a blessing that Yasha had given her. He gave his freedom to save a baby, a remarkable sacrifice. Beth wished he wasn't locked away but given the circumstances, it could have been a lot worse. At least now she was being educated by the freaking Mand'alor, and Gray and Baiko both are amazing caregivers with so much knowledge to share. It was working out. 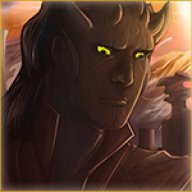 
Things had gotten tough on Clan Australis , with the Alor of the clan being jailed. The Hunter was certainly a champion of his people, his allit were his loved ones that he would raid and pillage for. But his dear Beth had lost something more then an alor, she lost her buir, the one father figure that had finally entered her life. Things were getting tough, this was yet another challenge as mandos they would have to overcome together. With a fake smile the mountain walked towards the dressed teenager, "Today you're going to learn how to dance! Because every mando needs to learn how to have a good time, and because I fracking said so. " . One thing that would never change, whether the warrior turn good or evil was how much he would love Beth. They were best friends, and to yellow eyes of the monster just as close as the sister he never had.

This being would teach her everything he knew, part of this being how to cope with feeling crappy.As rough brute he was uncharacteristically gentle with her today, placing his weapon of an arm around her shoulder. Skosk was wearing shades over his yellow eyes , " Remember to yourself close to me, or errr or Wacko Rags will get you!" . The simpleton burped loudly before walking his protected guest into the Fancy dance floor of the Cantina. Today the fancy establishment rowdy crowd , "You are not gonna be some loser that gets off on nerfherder milk, your no milk wanker. Today you sodding learn how to party like a boss!" . Wild music played as many gambled to their delight or demise at cards. A brotherly glare being made at those thinking about checking the youngster out .

The being began ordering drinks as waitress's came to receive the two seated individuals "Give the young lady a nice feminine drink The Lovely Lady , make it virgin. I want a corellian ground and pounder with a pinch of manda's delight." Every party king drank before dancing , it allowed for the terrible dancing to be ignored. While his companion would not be drunk, atleast he would be in order to ignore his failure as a dancer. This gave them time to prepare for dancing, and to talk face to face.Many of the failed drunks filled the tables, but this was overlapped with the amount of partners that danced together and talked a storm. Whether his lil sis would like it or not, the beast of a being would get her to freely smile and laugh .

Character Bio
She wondered how much would change between now and the time Kaine would be released from his prison. How tall would she be? Would he be weaker? After all, he wasn't getting any younger. What if he didn't even make it through his sentence? And what of Adara, that sweet baby who was tainted with a darkness? Beth remembered how she felt the first time she saw her - that terror that zipped through her. She began to bite a nail, worried about the future and what it had in it.

She could tell the situation with Clan Australis had impacted [member="Skosk Australis"] in an awfully sad way too. He had been a new Clan member when he joined the clan, it was only a few months after she herself was found by Kaine on her cold homeworld of Mygeeto. She gave a small smile as Skosk showed up. He had a fake smile on - she knew her best friend, no, her brother well enough.

What she wasn't expecting - at all in any way - was learning how to dance. She stared at the huge dude in front of her with a look of curiosity and ridiculousness, "I don't need to learn to dance!" She laughed a little, slowly realizing he was serious. "Seriously? I mean... I guess I can learn..." She pondered for a moment, her ears twitching slightly as she thought about the idea of dancing. She did indeed stay close to Skosk - for her safety and probably for any other individual in the room's safety too. Luckily, the majority of the people in the room were women with what seemed to be their spouses - a particular couple seemed to have just gotten married, considering they had "just married" on the back of their shirts.

Goddesses, she hoped she wouldn't be like that one day. As they sat down, she perked a brow, "Hey! I thought..." She pouted for a moment before sighing, "I don't think I could anyway. The smell of it makes me sick to my stomach." She shrugged, clearly dismissing drinking an actual alcoholic beverage. She put her arms on the table, looking towards Skosk as they waited for their drinks.

Character Bio
A wild smile grew at the Beth'ika , with an odd and rough charisma to him he pleaded his case, " It's not alcohol a virgin drink has nothing in it but the taste. " . He nudged the shoulder of the younger companion, " You're no Kath Horker, be adventurous !" . The massive Hulk began hunker down his pint, the strong pregame would prepare the worried and weary being for some fun. His Yellow eyes became foggy, and swayed back in forth, as did any being who drank such a high amount in such little time. However the drink did not impair the barbarian's movement , the same could not be said about his speech "Now you listen here, I will worry about both of us. No matter how old, or whether I take a dump in my pants here. I have got your back like a Butt crack!" . The slurred laugh came, "HERHERHEHREHRHERHEHREHRHEHR! What really matters is how you are doing,now talk to me."

The Yellow eyes began looking into the Eldorai's eyes , his smile forced, in an attempt to help his distressed allit. When they both finished their drinks they would dance, where they would hilariously look out of place . The Hunter felt the rush coming, it surrounding his ears , and horn. The Aura of sound invading him, but as an experienced drinker he managed to make Beth's words into clear words. How bad was her emotional state, how much would Skosk need to be there for her? It wouldn't matter, all that mattered is that he would be there to lend a shoulder to cry on, that the massive tank blow those who threatened her into smithereens. The posture of the hunter was leaned closer to his pointy eared friend, the massive frame of the muscular and hulk like being relaxed.

The music was sporty, upbeat and continued to give that vibe of fun, and with a belly full of the mixed drink the giant was in the right state to fake happiness . The tough teen manged so far from the looks of it however.

Character Bio
The girl gave a fake pout to her friend. It was going to be gross either way it seemed. She took a deep breath, trying to decide if she wanted to find out what it tasted like. Maybe she could get some other type of beverage that could wash it down? Maybe a soda, some milk? Beth couldn't help but wonder how milk would taste with such a drink. She shook her head as she dismissed the ideas that kept running around in her mind. There was no point in such thinking.

She hadn't even taken a sip of her drink before Skosk was already drunk it seemed. She perked a brow, one ear twitching curiously as she watched the giant man fell under the influence of alcohol. He had amazing control physically, but it was easy to tell how drunk he was based off his voice. She didn't even understand half of the stuff he was saying. She shook her head. She really hoped she wouldn't be holding the trash can for him... Her eyes widened at the mention of him... Well, taking a dump. She shook her head, "Oh Goddesses, please don't do that. There is a bathroom right down there." She pointed towards the nearest bathroom sign just in case he was even remotely serious.

She put her elbow on the table, resting her head on her hand. He asked how she was doing. How was she doing? She wasn't sure honestly. "I mean... Everything is just different. I barely had any time on Myrkr before I ended up moving to Mandalore. I still see dad almost every day... But it's not the same, you know? He's still in prison..." She sighed, not sure how to really explain her feelings.

"Skosk... Do things ever get better? Or even just... Normal?" The young woman sighed, her mind drifting to everything going on in her small corner of the galaxy.

[member="Skosk Australis"]
You must log in or register to reply here.

You aren't paid enough for this

You sure these are the meds we were looking for?
2 3 4

D
Yes, I'm sure it's perfectly safe for droids…

Should I be thanking you or killing you? I'm not quite sure.