Vendir was on mustafar. He was there because he had only been there once before. And he liked the planet anyway. Vendir stepped out of his stolen ship and said "looks exactly the same" he said. Walking indoors so he wouldn't have to deal with the heat anymore. He walked through the empty corridors of the installation "still as empty as ever" Vendir said walking into the control room. He stood there for a few minutes. Waiting. 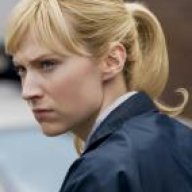 Light footsteps accompanied by a metal clang rang throughout the largely empty station on Mustafar. The source was a lean, bindfolded blonde woman in a white cloak, walking the abandoned halls with a metal staff roughly as tall as she was. Saoirse's latest adventures had brought her to this pimple on the backside of the Galaxy, and she wasn't entirely sure WHY she'd been tempted to hop off of her latest free ride on Mustafar. But she was here, now, at least until she found a way off.

As she wandered, Saoirse sensed eyes upon her and tilted her head towards a security camera. She stopped in her tracks, realizing that this installation wasn't as abandoned as she'd thought.

Vendir saw a ship approaching the landing pad. When it landed a woman walked out of it and proceeded inside. Vendir continued to watch her by the security cameras. The woman stopped and looked at one of the security cameras. He sensed she was a force user "you can fell me too, can't you" he said to the monitor. She walked away from the camera "I guess she knows I'm here" Vendir said taking out his lightsaber.

Yes, her gut instinct was right. There was company. From the sound of it - once Vendir drew close enough that the Miralukan woman could hear his footsteps - very, very TALL company. This was a mixed blessing. Another soul here meant she'd be able to find a way off of this molten rock and to someplace with good bars, beaches, and a bit of finery. But, as old, empty installations on nasty, dangerous planets rarely housed the sort of hermit who was inclined to be gregarious and helpful, she'd likely have to fight for that.

It was just as well. Saoirse did love a good fight.

As she heard Vendir drawing close, the short woman stopped in her tracks... and waited patiently. She got a feel for the hallway she was standing in, and how well she'd be able to defend herself in it. Wide enough to allow a good range of attack, tall enough to jump around a bit. Good. If the person coming was as tall as he sounded, she'd need to be light on her feet.

As Vendir walked down the corridor he stopped looking around. He then continued walking towards @[member="Saoirse Jenulia"] "what are you doing here" he said. Voice echoing through the hallways "I know you didn't stumble here on accident" he ignited his lightsaber. And stepped into the hallway the the woman was in "so are you here to fight me?"

Whatever the man had said was inconsequential next to the familiar crack and hum of a lit saber. Saoirse allowed a faint smile to creep onto her face. "I wasn't planning on fighting anyone, but you've already drawn your weapon." She pointed out, bemused. The Miraluka took a half-step back and dropped into a low pose, her feet spread apart and her staff leveled at her opponent. He was quite tall, which meant that the range afforded to her by her choice of weapon would be less impactful. Still, she'd manage. "A true warrior doesn't ignite his saber so easily. Let us see if you're half eager to use that saber as you are to threaten with it."

And, a more direct answer, the tip of Saoirse's staff blazed to light - a bright, grey blade. Since her time as an apprentice, the Miraluka had favored the same model lightpike that the Empire's elite guards favored. This choice of weapon had continued even after she'd gone rogue.

Vendir looked at the woman with her light staff turned on "a warrior still has to defend himself," he said and swung his lightsaber, a red trail following it. It hit the woman's light staff sending sparks flying. He swung again hitting the walls of the corridor sending more sparks flying. He stood back and swung his lightsaber to his side. Then he turned so his side was facing the woman "when threatened"

A hit to her blade, a second to the wall. Posturing, and little more. Some animals puffed up with indignation in the face of a challenge, some showed their teeth or growled. Others swung laser swords around. It all boiled down to the same thing. Saoirse accepted the hit to her weapon with little consequence, then adjusted her footing. "As you say, then. Defend yourself."

Saoirse was in motion, then. Her lightpike gave her an advantage in reach against a conventional saber, at the cost of a shorter blade - but a foot of blade was long enough to run somebody through. She stepped forward and tested her opponent's defenses with a series of rapid thrusts, keeping herself out of range of a retaliatory strike in case of a parry and riposte. Granted, Saoirse had been trained in Soresu - which was largely a defensive style - but she was not incapable of going on the offense if the situation called for it. Quite to the contrary.

The @[member="Saoirse Jenulia"] had started thrusting her light staff at Vendir. He blocked them all, some almost hit him. He ran at her and stabbed. She dodged and Vendir growled "you are very nimble" he said agitated. He slashed at her again. She jumped over him again. He turned quickly and grabbed her with the force "I feel that I should kill you now" he said "but killing you like this would be cowardly" he attempted to throw her down a hallway.

((You're writing out my character's attacks for her, which is kind of bad form. Please don't?))

Her lumbering opponent tried to throw her, but Saoirse Jenulia moved only to the whims of fate. Her feet were planted and the Force flowed powerfully through her veins - she would not be moved, not thrown down a hallway or cowed by reproach and taunts. "You have a big mouth." The Miraluka replied blithely, facing down her considerably taller foe with a calm expression. Soresu was motion - Soresu meant being the eye of a storm, deflecting and redirecting the howling winds that sought to cleave your limbs in twain.
Vendir ran at Saoirse and she set her feet stubbornly to meet his charge. She would be the mountain upon which waves broke. Locking her left arm into place, the Miraluka brought her lightpike up to intercept her opponent. If he'd charge her blindly, she would impale him with his momentum - the way a spear was used to strike down a charging stallion.

"What" Vendir said surprised that he could not throw @[member="Saoirse Jenulia"]. He growled "it seems that you are stronger than me in the force" he lifted up his left hand "which is not surprising since I am only a padawan" he sent force lighting at her.

Every good little Sith Paddie knew how to deal with Force Lightning, or at least recognize it on sight. And Saoirse was more than Sith Padawan - she'd been a Sith Knight before going rogue and taking her show on the road. When the air began to reek of ozone and crackle with electricity, Saoirse brought a hand up on reflex and unleashed a deluge of her OWN power in the form of Force Lightning, the crackling blue bolts meeting and canceling out Vendir's, their combined power arcing off of the walls of the abandoned installation and setting the lights to flicker ominously.

Vendir couldn't hold his force lighting for much longer. He looked around for something. He found a crate. With his other hand he picked up the crate and threw it at @[member="Saoirse Jenulia"]. He took that time to re ordinate himself.

Her opponent lifted something with his other hand - what had happened to his saber? Not that it mattered. Sao didn't have time to worry about the logistics, when a crate was screaming towards her head. Displaying her impressive flexibility, Saoirse twisted at the waist and limbo-d under the flying box with centimeters to spare, before standing back up with a breathless grin. "Clumsy." The Miraluka stated as the crate smashed against a wall behind her, grinning. "My turn."

Spinning her pike as she took two steps forward, Saoirse judged the distance between herself and opponent. Two more steps, she was in a run. Two more, a sprint. The blond lancer lept into the air, her white cloak and hood streaming behind her, her pike thrust forward to try and impale her foe with the full force of her momentum behind her. Provided he deflected that initial strike (which she fully intended for him to do so) she would be prepared to land and begin a flurry of strikes with her lightpike, fluid jabs and slashes and parries.

Vendir watched the woman run towards him with her pike. he waited for a moment until she got close enough then he took out his lightsaber again. turned it on. then swung it at the woman's pike. deflecting it and sending it away from him. only for the pike to come swinging around and stabbed him in the stomach. followed by slashes across his armor. he deflected some of them but she parried most of them. Vendir jumped away from the woman's attacks and looked at his armor "nice move" he said. then he charged at her.
@[member="Saoirse Jenulia"]
You must log in or register to reply here.
Share:
Share
Menu
Log in
Register
Install the app
Top