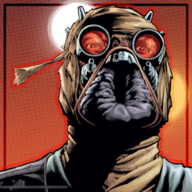 Once again the Tusken was out on his home world. Walking along a small ridge in the Jundland Wastes where there was some vegetation. After learning of his Force abilities he felt like he always had a nice connection to the desert planet and the sparse amount of life that inhabited it. But it was possible that it was just him.

Thinking that he was alone out here in the canyons by himself he had his mask off so that he could chow down on a not so delicious Black melon he just recently acquired. But he'd grown to tolerate the not so good tasting fruit. It was currently dusk out, so the cold desert night was gonna be rolling in soon.

However, through the seemingly noiseless environment A'Runda heard something echo from the canyon walls. Quickly finishing what he had left of his fruit he finished it and put his mask back on. It sounded very familiar to him. Picking up his pace he moved to the source of the sounds. As he got closer he was able to hear it better, it sounded like a bantha was in trouble. Groaning in anguish loudly. Getting closer and closer with each step he made it to a small cliff with a bit of a drop, there he saw what was making the noise. It was indeed a bantha. It seemed to be laying down on its side, all alone.

Making his way down to it he approached the large animal. As he got closer to it the animal finally took notice of him, and let out a sort of growl. But it seemed less like it was trying to be intimidating and more like it was frustrated. From what he could tell it was a bantha cow, meaning it was female. As A'Runda moved around it to see what was wrong with it he eventually caught sight of the problem. It was wounded. It seemed like there were several nasty looking blaster shots on its side. As he took a closer look the bantha seemed to protest with another groan as it lifted its head some.

As it did that the he made tried to shush it some in a calming voice. Trying to show that he wasn't here to hurt it. "Eyaak urk urk..." (I mean you know harm...) he said to it with a gentle tone. After that the animal seemed to calm down. Probably hearing the Tusken language gave it a sense of familiarity. He could tell that it was domesticated, still having a saddle on her. Getting a bit closer he looked over the wounds. They weren't Tusken, he knew that. They were blaster wounds, and Tuskens used slugs. Soon the bantha let out a deep breath, perhaps she was getting more comfortable with him being next to her. Hating to see the animal hurt like this he wanted to do something. As he reached out to touch the large animal he felt something, something in the Force. Like there was a way to heal her.

Closing his eyes A'Runda concentrated on the feeling, letting the Force guide him. Soon he felt it flowing around his hand as he reached out and away from him. As he did this he felt the anguish from the bantha lessen. He wondered what was happening. Was he helping it? Already the feeling he got from the animal was much better. It seemed like he was healing it through the Force. He would keep it up for some time. Sensing that he was helping the poor creature.

Character Bio
As he continued healing the wounded bantha through the Force it seemed to be in a much better place. Eventually the large animal felt well enough to get off its good side and began to stand up. Withdrawing his hand and backing up, it let out a loud groan as it got up on its feet. The female bantha shook its head and body to get the sand and dust off it. Already its blaster wounds were looking better.

A'Runda would feel like he ought to investigate, he was sure the bantha wasn't going to do anything. Walking around the area he checked out the ground. From the look of things it seemed like there was a struggle of some kind. Then something caught his attention. It looked like two odd sticks stuck in the ground. Walking closer to it A'Runda saw that it was a broken gaderffii stick, both broken ends being shoved into the ground. As he picked it up to examine further he heard a moan from the bantha.

However, it sounded kinda farther then he expected. Turing to face it he saw that it was walking away from him into the night. He wasn't sure why it was walking off. He'd assumed that her owner died, and when that happens they often died of depression. Typically by starving themselves to death. Unless... her owner wasn't dead. That would explain its sudden determination to continue moving on. Perhaps he could help her on their way back to her clan and owner.

Jogging up to the banta he walked beside it. "Urhu?" (Carry me?) He simply asked the large animal, from the look of it, she didn't seem to care about his presence. So taking that as a yes he moved over to her good side and began to climb up onto the saddle. The bantha just shook its head a little made a sharp exhale. Now the two of them could travel through the night together.
You must log in or register to reply here.

Under the Tusken Suns [Past RP] [Open to Past Mercs]

The bond between captives
2