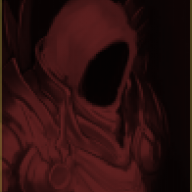 The hot Korribian sun had beamed down on the back of the Sith Juggernaut, the humidity of the air settling around the large behemoth. A metallic sigh escaped from the armored Sith as his feet had sifted through the hot sand. It had been seven years, seven long years since he was last seen within known space. The armor clad individual had kept walking in slow, deliberate steps back towards the place he had called home for years. He grunted, moving over a few of the sand dunes created by the vast planet, most of which was left desolate save for the areas surrounding the city of Drendae. He moved his body in a roll over some of the higher sand hills, and dusted the sand from his robings. Beneath the heavy armor, a sickening smile escaped his lips as the Sith Academy had come into view. He stopped walking to admire the architecture within the Valley of the Dark Lords. So many ancient secrets, so much of bogan aura, all condensed in one place. He rolled his shoulders back, several of his bones making audible cracking noises. It was... refreshing.
"Home sweet home", he had muttered to himself as he continued his walk towards the Sith Academy.
@[member='Saeldar']

Character Bio
Korriban. It was a rare affair when the Apprentice returned to this dismal planet, which provided no heat to those who decided to tread its sands. It must have been the lingering presence of the darkside, but she always felt cold when on this particular planet. The Academy rose before her when she passed the final dune, sighing as several alchemical creatures ran around here and there, created centuries before, if not longer. One day she would make similar, if she required it. Sithspawn were the perfect companions, provided they were bent to their Master's will. Human, creature, it did not matter what they were prior to the twisting of their biology, when they were finished with, when their mind was destroyed and rebuilt, they were cannon fodder. It did not matter if they were killed, because they were shells, empty and devoid of life.

Trudging through the sands she headed towards the Academy, a sight she honestly despised. As ever her reason for being here was one of minimal importance. Another scheduled training session, only this time it wasn't of her own wishing. Saeldar had a very specific regime for what she sought to learn, and anything outside of that was, in her eyes, a waste of precious time.

As Drayus' metallic boots sifted amongst the sand, he focused on the Force ebbing around him for a few short moments. Sighing under his mask as he looked to the crowds of Apprentices and Acolytes move towards the Academy in one synchronized manner, some talking amongst themselves, while others stray towards the back of the crowd, keeping silent. Drayus scoffed. They had much to learn before they earned the right to call themselves Sith. Nonetheless, the Juggernaut kept walking, his rather muscular frame shouldering through several of the Apprentices on his way in. Some had fallen over, but they knew better than to retaliate against a known blademaster, much less one of his size. Drayus stood at 6'8, and coupled with his experience using the Dark Side to twist the mind and inspire fear in others, he was quite the intimidating individual. Nevertheless, the Force had called him to one person in specific. He gazed under his visor to the girl at the front, with black hair and deathly pale skin. She seemed familiar somehow, and it had suddenly hit him. Saeldar, he had thought. Of course. She was the one he had met a few years back in the Unknown Regions. Still, he thought she would be just as surprised as he was see her. He was heading towards the Academy anyways to instruct the younger members of the Empire in the ways of the Sith. He grinned, walking behind her through the crowd, and placed one of his large, muscular hands on her shoulder...
@[member='Saeldar']

Character Bio
[Sorry been very caught up, getting old posts replied to]

Her gaze lifted up to the sandstone towers and she shook her head ever so slightly. Did she really have to be here? She had Thyrian to sort out, Alchemy to learn, places to visit... She wasn't even sure what the lesson would be, only that from the looks of it half the Apprentices in the Academy had been invited along. Saeldar could feel them all behind her, the sheep of the Empire, well what did that make her? I am the butcher, sending them to their deaths she mused, as though leading them to an abattoir. Something about that thought brought a very subtle smile to her usually featureless face... But it did not last long.

Suddenly she felt a hand upon her shoulder, amidst so much chaos she hadn't picked up on a stronger Force presence, and one that was known to her. The moment the hand touched her she instinctively lashed out with her mind, not in an assault but to brush the surface thoughts, to take the name of the one who had touched her. And yes, it was certainly someone she knew. "Calo..." She said, somewhat dangerously considering she was using his name from when he was a Jedi and not his chosen Sith-name.