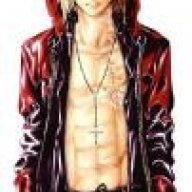 Parkour-Alex is very fit, being able to move around freely and the strength to push on.

Talented Tongue-He is a clever speaker and can learn other lanaguges easily.

Weapon skillz-Has knowledge of weaponary and a good shot with a blaster.

Risk-taker-He likes to do the impossible, but if he isn't that skilled to do the job. It would lead to his demise or capture.

Trust-After his father's death to his business partner, Alex has a hard time believing in people.

Training from a Sith Witch.

Speed-Faster then normal Freighters but nothing compared to lighter vessels.

Laser cannons- One in front and the back.

History Alex was born on the planet of Denon, as his father was a well reown merchant. His mother had died giving birth to him, but he wasn't sad because he never knew her. It was known that she was ill from being on this planet but he wasn't normal. As the years went on, his father would tell him the same things. He was a special child, and that he would do great things in his future. He never knew, what those very words meant at all.

Youth
Alex was unlike most boys his age, at the age of 9. He started to advance in class beyond that of a average human. He was tested at the local academy with a IQ beyond that of a normal human. He was able to construct blocks, think on a higher level to complete a task and learned different languages by ear. He was sent in advanced classes at a young age, and soon graduated at high class learning at the age of 13. He was known for his calm personality, and smartass attitude towards people. Like a kid he was, he always had to run away from fights. He also felt something different among the people of the world, some type of energy. It was unknown to him, and when he went to his father, he started to explain that it was called the force. Yet, I had only known that it was the energy belonging to the jedi. I decided to leave this energy be, because I knew nothing about it.

A father's touch
When he was 13, he had started to learn the tool of the trade from his father. His skills with langauges had given him an asset to speak many of the important languages to trade with many species. Leading him to be his father's right hand and on his left was his business partner Bolt kasenida. He also was a runner which lead him to grow stronger and more agile to get shipments across the markets and towns to the customer. Three years had gone by since his introuduction to the merchant world as he learned to use a blaster and how to sell weapons to customers. Even fly his father's merchant freighter around for a joy ride if needed too. 15 years old and Alex was enjoying his life.

The change
Despite the happy times, it all changed one day that he had gotten home. His father and Bolt were arguing over who would go to the top and a shipment that was coming in. Push came to shove and the sound of a blaster had been fired. Alex rushed over to his father aid but when he had reached the scene. Bolt held the blaster and his father was lying on the floor dying. Bolt had turned to Alex ready to put him out of his misery but he had fear in his eyes as a aura had devolped around Alex's body. Alex grew so angry that little objects in the room had started to float in the air, bolt was stunned but before he could shot the blaster. Alex had extended his hand out and pushed him into the wall, causing him to drop the blaster. Alex let him go, and grabbed the blaster with a blank expression on his face. The choice was either let him go to jail or kill him to avenge his father....despite his judgement. He had put a laser through bolt's head and dropped the weapon. After the issue was resolved, he spoke to his dying father and asked for forgiveness. His father only said to place the gun in his hand and leave this planet.

The Choice
It had been two years since that day and Alex had taken his father's words to heart. He had left the planet, his father's death was said to be the result of partner and the son of the merchant was never found. Alex was now traveling as merchant under a false name. Grimm Dark the Masked merchant, but despite his ways. Along with his travels, he had started to train his force powers as they had been triggered by his emotions. So he tried to improve himself the best he could with self training. He was reminded of the day that he killed Bolt, it was without remorse. It felt good to have power but what was he to do with it?


KILLS:
None so far.

BOUNTIES COLLECTED:
None so far.