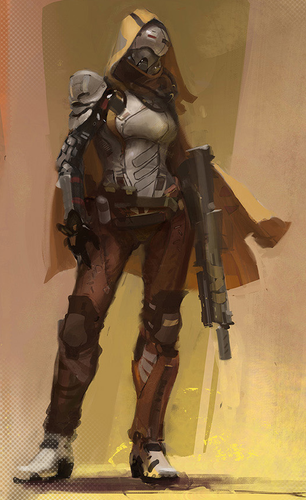 ​
http://images6.fanpop.com/image/photos/36000000/Destiny-video-games-36055253-306-500.png​
Intent: Upon completion of the appropriate dev thread, to create a simple armor using lightsaber/blaster resistant materials. Essentially, I want to make a suit of armor as close to Mandalorian Iron as possible without it being Mandalorian Iron.
Development Thread: Raid on Roche (acquired Phrikite Ore and Ultrachrome, in progress), Hath Found Me The Jedi, I'll Try Not To Die (Additional story for how the armor was crafted, in progress)
Manufacturer: Akovin Stock Co.
Model: Ultrachrome-Phrik Combat Armor
Affiliation: Triam Akovin's body
Modularity: Moderate modularity (Many "additions" to the armor will have to built over/around the original armor, but the process should be fairly easy considering the segmentation.)
Production: Unique
Material: Ultrachrome underlay with Phrik Plating. (Durasteel also present)
Description: The Ultrachrome-Phrik Combat Armor isn't any more complicated than it sounds. It is specifically armor intended for combat situation made of Ultrachrome and Phrik. The majority of the armor consists of ultrachrome, a lightsaber resistant material that has the weakness of melting all at once when enough energy is applied. These properties are well known, and to combat this weakness the much more durable and lightsaber resistant material of Phrik is applied in thin plates over the vitals (torso/head, and areas were arteries are located), and sparsely around the remaining parts of the limbs. This leaves many gaps of exposed Ultrachrome. She hides these targets with over-clothes.

The major strength of this armor is quite obviously its effective resistance against lightsabers, along with a light weight extreme durability. A major weakness however is that it has many exposed regions where if enough energy is applied to the ultrachrome, it could quickly heat an entire segment of armor, eventually to the point of melting.

Classification: Anti-Lightsaber/Anti-Blaster
Weight: 25kg
Quality: 8
Other Feature(s): It has a built in backpack for any scavenged loot, but it is small with limited capacity. It's made fore grab-and-go when something needs to be taken and two hands are required for some other task, such as shooting a rifle. To get an idea of what it can hold, lets say it can hold between one or two decent sized textbooks. Her helmet is also collapsible and can fit in her pack easily without obstructing the area she has left to fill.

Character Bio
I hope I didn't post this too soon, I wasn't thinking. Does the thread have to be totally completed before I post a submission?

Character Bio
This submission is completed minus the dev threads.

Also, I'm unsure if that link credits the image, is that what is needed or does it require the link to its origin?

In future please don't repeatedly post in your submission, it makes tech judges feel as though it's already being looked over. As it stands the dev' thread requires completion BEFORE a submission is posted. I'll let it slide this once, but don't do it again; mention me when this is done.

Character Bio
@[member="Triam Akovin"]
It's been over a month, no mention of the threads being done. This is being archived. PM me when they're ready, so this can be judged.