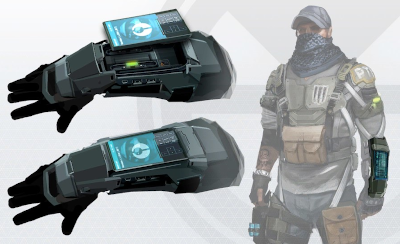 Guard your universal remote control by building it into your arm!​
OUT OF CHARACTER INFORMATION
PRODUCTION INFORMATION
SPECIAL FEATURES
STRENGTHS
WEAKNESSES
DESCRIPTION

Apex wanted a robust but affordable design from the A-MWD1. No great offensive potential was needed, but eliminating the need for medkits and climbing gear to be carried on the back or belt is a worthwhile trade. The main point of contention between the Uos originally working on the project and the Tann designers that eventually took over was the inclusion of a multi-tool. While the Uos wanted it all included, the weight was too much to make it practical, and there is only so much room in a wrist device. Typical Uos arrogance almost cost the team the project, running what should have been a fairly uncomplicated design almost five hundred thousand credits overbudget.

It was decided the entire T Division would be taken over by the Tanns, which according to this administration exec is about time, damn the puns from the staff canteen that will result. T stands for Tann from here on out. When Kallas Tann was brought on the project things began looking up, the design was modernized, the interface was cleared up and the unit slimmed down. The wrist device ended up looking like part of the arm, sleek and form-fitting. There is still some weight for a user to contend with but it's certainly not unmanageable, only effecting certain lightsaber styles requiring more wrist flexibility than others. The average infantry or blaster user shouldn't notice a difference, nor should most martial weapons or styles including many lightsaber forms.

As with all Apex holonet connected apps, this one has a standard two firewall approach, a proxy monitored by Apex or another third party, and a standard packet filtering firewall. The triple key encryption is standard on most apps and simply means three keys need to be broken to access the signal or any data sent. Holonet access allows apps like calculators, stock tickers, you name it to be accessed from your wrist. The addition of the climbing cords ability to retract and pull the user along was considered useful for both black ops activities or rescue teams carrying a body. Gripping the chord with one hand before retraction is considered much safer and more comfortable than carrying the weight on your wrist alone, even in armor.

Echani hand signals came with some consultation from the House of Keth, who had made a small donation to the project, hoping to finally after decades of using substandard equipment, purchase equipment that their Honorguard could communicate with via motion, which is what the traditional Echani prefer. If the option is engaged, the hand signals are transmitted visually but also with a form of Echani-path morse code via coms if required.

The knockout blow nickname came from a reporter who barged in demanding a demonstration. ApexSec would like to point out it turns out the wrist stunner works very effectively on reporters, and that they fully support GNN's right to a free and fair press.

End of File
Last edited: Thursday at 6:23 AM
Companies A2 | A1 - Themes: Arrival | Calculation | Future​
You must log in or register to reply here.