A Journey In The Dark

​
And so it was that Aelion first sighted the trees which marked the edge of two vastly different lands, where worlds collided and the veil between mystery and magic hung heavy on the air. There upon its cusp the amalgamation which had been borne upon his creation was realized, and as he flicked his gaze back down from the evergreen foliage to the weathered map within his grasp he knew that it was so: Averlorn. A land he had heard of only in the fantastical tales weaved from the lips of his Mother, who spoke of the ethereal inhabitants that had captured her heart.

It had been longer than he could bear since he'd last heard her voice. A woman of strength and will, to see such vitality degrade in a matter of months had been a harrowing experience for the boy who had known naught but her company since the dawn shined upon him for the first time. As it waned upon her, bringing forth the twilight of her life long before she was due to pass into the Halls of Odiir, the parchment which now lay between his fragile fingertips had been brought forth from a chest filled with wonders, and the circumstances surrounding his conception had been voiced.

Skepticism held no place within the boy who had always known himself different from she who had sheltered him. Where she towered with brawn, darkened locks, and a hearty laugh, by comparison he found himself lithe and nimble and weak, with eyes that mimicked the cosmic stars above and hair that seemed kissed by the very fires which kept them safe and warm at night.

A quiet yip drew his attention to the tumbling mass of red fur by his feet. Reaching down he ran his fingertips across Aias' forehead and toyed with her ears before glancing back to to the evergreens which stretched out ahead of them. It had been a difficult journey down through the West, following the mountain range which seemed unwilling to relent. Tiptoeing around village borders, living off the land as his Mother had before him... It was a wonder he had survived, and without his companion he doubted he would have at all.

Without word the duo pressed on, until all that was light became enveloped in the uncertain mists which skirted the edge of the forest. A very real sense of dread washed over him, and down below he felt Aias press closer against his thigh. The hand remained atop her head, trusting her sense of smell and uncanny ability to sense for danger to lead them on their way. After all, it was impossible to read in the dark and his own senses could only get him so far... 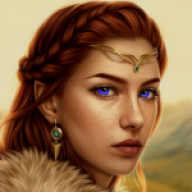 The turn of the leaves upon the holy oak bid the summer days farewell.

And soon all the creatures of Midvinter would spend the cold cold months hidden beneath the ground or within the narrow nooks of the trees, warm and safe within the company of many. Winter was approaching, the clip of the wind brisk between the branches had journeyed far from the south, a place beyond the lands of men or being of such magnificence they stand tall and proud within their white fur. The song on the wind speaks to the Lady of the Lake her mother, telling her it is time to attend the trees and set them to rest, a deep sleep until the Dawn breaks and blankets Midvinter with His Grace.

Ióunn wanders the moss covers trees, aside a small singing brook toward the veil of the enchanted mist, her pointed ears detect the sound of he who comes, and she turns her gentle head to the crook of the tree and through it the passing Vhaanir so sacred to them all, walk a well worn track and among them is Bucky. Others .. know him by the name of Belawir. Flared nostrils issues cold mist as he snorts at her before passing by to protect his herd.

Seeping around her feet the mist rolls in, she reaches out to touch it running her fingers through the moist air. So much has changed since the coming of Thrand that now the mist lack their threat which was once upon them, yet they still herald the calling if someone enters the Mists of Averlorn.

And on this day, the herald was answered.

Her feet as soft as virgin snow made no sound as she trod the moist moss across the rocks and the singing brook toward the approach of stranger, her autumn green tunic matched the surrounds and she moved with grace and skill within the thickets. A little boy lost. She watched him for a moment, her ears pricking in all directions at all the sounds that alerted the forest to his presence filled her senses and her eyes narrowed to take him all in. He is frightened and alone.

With a wave of her graceful hand, the mists parted and cleared his way and before him she stood with a smile.

Character Bio
It was tiring, to remain on edge while walking through the darkness. Each step tentative and uncertain, noises he had never experienced before lurking beyond the path they now walked upon - if one could really call such a path, after all Aelion could not even see his own feet much less the ground - and his muscles were poised ready to flee at a moments notice.

"It is okay, Aias," he soothed, as much to reassure himself as to calm the vulpine by his side, "I won't let nothing happen to you..."

After all this time, the many years he had spent with her since both were mere cubs, it was impossible for him not to pick up on the subtleties of her emotions. Her fur was on edge, ears constantly twitching, and her nose was working overtime to sniff out danger.

"Poor girl," he cooed, the hand which remained atop her head now leisurely running fingers through her fur, before lowering his voice to a mere whisper. "I'm afraid too."

And how could he - they - not be? The mist which clung to their skin was cold, enveloping them like a blanket of ice, and while such would usually not phase him for he was as frost-kissed as his Mother there was something unnatural about that which cloaked him now. These forests were haunting, eerie, almost as though they were not meant for the likes of him.

That likely was the case. Mother had always been so reluctant to provide him with information about his Father, and his people... And though he had come across few others in his years none matched the descriptions she had provided. None spoke of the fae of the forest as she referred to them. Tiny folk with delicate features and pointed ears.

His free hand lifted up to toy with his own, only there was a curve where arch could otherwise have been.

I am smaller than the other children he mused, not that he had seen very many. Most looked upon his Mother with distrust, treated her as though she held the madness within her, their home had been deep within the Northmark where few ever ventured, too close to the Lake of the Dead for their own good - where the dead marched the icy planes.

What did he know of the people she belonged to? What did he truly know of his own place among them?

For all he knew, it could all have been lies. Tall tales told to a child with vivid imagination...

And then the mist began to part, as though blown away on the breeze which didn't quite reach them down below the treetops. And there she stood, in all her mystical glory, with ethereal appearance and pointed ears.

Leo's mouth dropped open, and he stood there in awe.

Character Bio
The youthful woman stood tall and proud in her countenance, the mantel of nobility sat on brow like an invisible crown, yet there is a soften in her eyes that fall upon children with the innocence of their nature. Her hands with fingers woven sat rested on her front only to unravel and sweep in a gentle arc to her side, to the child this simple gesture would mean little, but those hidden with the branches, it was an order to retreat .. for she was not alone. The unseen Aelvar rangers vanished back into the mist heeding their princess' command.

Bending at the knees, Ióunn folded her long legs and sat upon them on the ground, a graceful movement of her hand reached toward the boy and his companion, it was an invitation of come closer and join her on the soft moss. "I bid thee welcome", she spoke softly not to alarm either of them. What was this small boy doing here, so far away from anything that might be familiar to him. He was alone save for his companion, there was no one else within the mists. A quick study of his face revealed a likeness to the Vakyri, yet there is a sense of the fair race that has remain hidden from them for thousands of years until recently.

"Whither do you wander?", she asked him as she patted the ground encouraging the small boy to her, "Do not be afraid, you are safe with me". Turning her hand until the back of it was presented to the Vulpine for which she could smell if her courage was enough to take the steps.

They were being watched, Ióunn's ears moving until turned toward the gentle cooing of birds in the trees as the veil of the night would soon arrive and shroud the forest in darkness. "My name is Ióunn, what is yours?".

[member="Ninaelion"]
You must log in or register to reply here.

Whispers in the Dark

Training in the Dark arts

Whispers in the Dark (Astrian)

Dark Jedi in a Sith Society