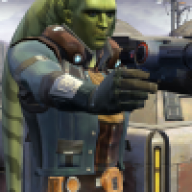 Character Bio
It all happened so fast, the empire came barging onto the planet like an unexpected flash of thunder on a sunny day.

Most people weren't ready for the absolute chaos the empire's arrival would bring onto the planet. Trade routes were being closed off so resources began to run dry. Not a single soul knew why they came to the planet in the first place besides a few rumors suggesting they're looking for a band of resistance fighters who fled here. The details on what the outlaws look like are vague and unspecific. My guess is they didn't want any sympathetic citizens attempting to aid the resistance fighters in escaping again.

If anyone attempted to leave the planet they'd be met with a massive laser beam blowing you out of the sky like a fly getting swatted.

After a terrible, draining week of being under the empire's grasp I decided it was time to finally take action. I got all my weaponry together and made a plan to sneak past the empire's laser beams.

My plan was perfect, except for one detail. I needed multiple people in order to pull it off, so I went to some areas of the planet that haven't been completely ruined by the empire and started spreading the word around,

"If you want to die, stay here. If you want to escape from the empire's tyrannical grip come to the closed down factory. The choice is yours."

Now I sit with my plans spread on the table, waiting to see who'll be the first few to join me......

Character Bio
Foolish...publicly letter your message get out like that. But must be a reason behind it. The empire let people like Jatar know about this little operation to escape. With his blaster drawn he stepped into the abandoned factory ready yo come face to face with the one orchestrating this little escape plan.

There he saw him, [member="Aeron Tosh"] standing over a table with his plans spread out. "Hello there, Friend..." He said through his helmet. Jatar moved forwards with his blaster in hand aimed at him. "So, you want to get out off the planet huh?" He asked, already knowing the answer.

There was an odd yet tense moment where he wouldn't say anything, until he broke the silence. "A little foolish of you to let your plan go public. The empires on to you, that's why I'm here. The empire sent me. However..." Jatar then holstered his blaster. "I'm not here to ruin your plans, I want in." He let the empire know that he was on the mission to deal with the escape, but he did it so that no one else would interfere with it if he joined. Meaning that with him, they could be covered. Sure it was a little slimy to double cross the empire. But he wanted off the planet more then a few quick bucks.

Character Bio
[member="Rogo Hin"] entered the factory. Looking cautious and deadly, just the kind of person I was expecting to actually show up.

As he approached the table I noticed a blaster pointing directly at me as he called me friend, "A little contradictory to call me a friend while you point your gun at me, isn't it?" Then, he rambled on about how the empire was fully aware of my operations. I expected the locals to keep it secret but apparently the empire has more influence than I anticipated.

After he explained that he was intending to join the plan instead of ruining it, I couldn't stop but think, "How'd you know the empire already knows?"

I paused to let him respond to the question, and then proceeded to explain the plan. "In order to pull this off we're going to need something that can mask our ship's presence from the empire's radar. That's how they keep track of all ships that enter and leave the atmosphere. Either that or we're going to need to find a way to impersonate a imperial officer in order to get clearance to move, but before we can do any of that we're going to need to steal a ship. You think you can manage getting us a ship?"

I waited patiently for his response.
You must log in or register to reply here.

C
You can't escape your destiny.

Escape to the sky: A Star Wars Adventure (Request invite)