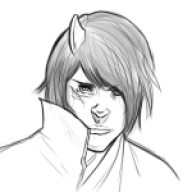 Cain was walking to the location of a blackmarket information broker regarding ancient and powerful force powers. There was nothing but space around him. The ground was just a big floating hunk of metal. Bespin's Cloud City was known for its miraculous beauty. Birds chirp around him, and the commotion of a city could be heard from above. Cain wasn't sure if he was still being chased down by Sith. Even so he still had his guard up in case one came by. 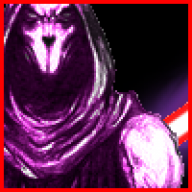 Cloud city, a place known for it's luxury. Maverick had traveled here in attempt to gather information. He knew the city was renown for luxury, meaning they had the best of the best of the best when it came to things. They load city streets echoed as he passed through them, yet he never even noticed any of the people or the noises, only the words that where located on the book in front of him. His finger glided across the pages of the stolen book, looking for any kind of answer possible. His mask was pulled down around his neck and his robes hung open showing his light saber hilts, he wanted people to know who he was, and not bother him. He expected it to be this way until he bumped into someone causing him to drop his book.

Cain heard footsteps behind him. As he turned around to investigate he smack his head on some hard object. He stepped back, and held his lightsaber. Closely inspecting the man, he could see that he had two lightsabers on him. "What are you doing here?" Cain was ready to defend himself if need be. He always carried four lightsabers, but two were constantly concealed.

Maverick came to a halt as the book fell to the ground. In the pause he heard the man's question but never acknowledged it as his gaze was to the ground where his book lied. Kneeling over slowly he grabbed the book and dusted it off before standing erect again. On his way up he noticed that the man before him was holding on to his light saber, and that he had one horn. His hand is readied on his blade....proving that he is not jedi, no small act as to bumping into someone would cause such a hostile threat. Maverick stood motionless as he watched the man before him, still thinking to himself. Placing the book under his arm pit he motioned for the man to move out of his way. "My reason for being here are my reasons alone, more along before you hurt yourself with your pretty little toy" he said referring to the lightsaber as he started to walk past the man.

"You can think what you want, but this is not a toy. I'm sure I can use it better than you." Cain wasn't angry at the insult. He was "displeased". He wanted to prove that he wasn't so unskilled that he would hurt himself. "How about I show you just how much better?" Cain smirked. He wasn't going to kill this man, just teach him his mistake. [member="Maverick"]
Yellow dialog=Normal voice​
Cain's Audio Log

After pushing past the man Maverick stopped as he heard his words. He wanted to laugh in the man's face, but he knew not to. You never underestimate your opponent. His right hand came up to book again, pulling it from it's resting place and then relocating it into a side pocket on his cloak.

His left hand then opened up and called his light saber to it. "Your arrogance will be your down fall!” He said with a hint of anger as he spun to the left leading with his light saber as it lit up, aiming to slice the man from shoulder to shoulder.
Maverick​

Cain stepped forward while spinning around. His lightsaber ignited, and clashed with the Jedi's. A small wave of force came out of Cain's off hand, to try and make the Jedi slightly off balanced.
[member="Maverick"]
Yellow dialog=Normal voice​
Cain's Audio Log

Maverick was impressed to see the man able to clash with his blade. It did come out of no where, meaning this guy wasn't ordinary. Just the person to test his skill on. Maverick's body was pushed back a few inches as he felt the force collide with him. Using his right hand from his hip he used the force to grab some fruit from a near by stand. Using his left hand after regaining his balance he retaliated with and inward swing from the left, much like a haymaker. This attack wasn't meant to really do anything other distract the man. Still force gripping the fruit from the stand on the right he threw it at the man as he was swinging from the left. "Where did you get those light sabers from anyways, horned beast?"
Maverick​

Cain hadn't been in a real fight in years. It felt good to get his rusty body moving again. He saw as the Jedi started to regain his balance. Cain heard a faint noise to his left. He kept his eyes on his target. The noise was probably nothing. He watched as the Jedi slashed towards his left side. Cain's lightsaber swiftly moved down to block it. Shortly after he smelt something. Is that fruit? His head got smacked by a piece of fruit. He looked down and watched it roll away. With a small chuckle he replied to the Jedi "If you must know, I made them. Now there's something I wanted to ask you" He said while pushing the Jedi's lightsaber away "What is your name?" Cain took a step back. He quickly blasted the Jedi with the force three times in a quick succession. He then lunged forward, hoping the Jedi was off balance enough to land a strike. Cain's blade headed for the Jedi's left leg.

Maverick was already on the defensive after the fruit smacked that man in the face, but that didn't mean it would be enough to give him the edge. As he watched the man send out the first two waves of the force he sent out his own to waves neutralizing the affects of them, the but the third one caught him off guard sending his back about three steps, enough force to save his leg all though not intended. He summoned his second saber to his right hand with the force, only this one would be pointed towards the ground, the saber ignited and collided with the mans saber. Pausing in that position Maverick looked up at the man.

So he must be a run away jedi, to have the ability to construct his own light saber, that is clearly the only option Maverick thought as he send out a slash from his left hand for the the throat of his opponents. He wasn't trying to kill him or even hit him with this attack just back him away. Standing up right Maverick brought his right hand up to his neck, pulling his mask up and over his face. "Names Maverick " Maverick this rushed the man. His body spun in a circle as he grew close. Leading with his left hand he brought his light saber up from the ground in towards his for head half way through the spin his right hand would rise up as he did a one eighty in attempt to place the light saber in his right hand that was backward still in to the center of the mans chest. "Who you hiding from anyways, beast?" Maverick asked during the one eighty spin.
[member="Cain Laatl"]
Maverick​

Smithing together the Future in a Duel (Yasuo)

A Clash Of Opinons

Clash of the Titans [Jacen Cavill & people on Corellia]