Weapons -
Armour -
Misc Equipment -
In addition the 701st makes extensive use of equipment captured in the field or on loan from employers, however this gear unless extraordinarily useful, is rarely used beyond the mission they were acquired from/for.

​Wilderness Battalion - The 701st excels in fighting in natural environments, they are able to easily use natural formations and features to their advantage.

Asymmetric Warfare - The 701st fights dirty, ambushes, assassinations, hit and runs, everything but a proper fight, by the time an enemy knows what's happening the attack is long over with the 701st 's objectives completed.

Quality over Quantity - Each member of the 701st is given a trial by fire before being inducted into the unit properly, only the strong survive, and only the best of those are even given the job offer. Veterans are highly encouraged to share what they've learned with the newer members giving them a good knowledge base, and training exercises are common, giving them the opportunity to apply those skills.

Urban warfare - The 701st is inexperienced when fighting in urban areas, most of the unit's training and expertise is fighting in natural environments.

Open battle - The 701st is a guerrilla style unit, although they can fight in open battle much of their specialisation is lost.

Poor organisation - The 701st is at it's best when able to operate free and unrestricted, attempts to create a more organised structure, or a plan with more than "go there and kill those guys" or "protect this" will often be ignored at best, or cause confusion at worst.

Description: The 701st was formed by Jack Anderson after leaving his home world of Terra Damnatias, he was looking to preserve his outdoor lifestyle, so his solution was to make a job where he could keep it. Before leaving home he took out a loan and bought a modified CR90 corvette as well as a large number of surplus imperial troop drop pods as proper dropships were too expensive. His initial crew was 750, 300 of them also from Terra Damnatias. Their first real mission was on Alzoc III, a group of pirates had a stronghold, and a rival group wanted to take it over, the 701st was able to do so but all but the 300 Damnatians were killed. (Source: Echo Defender - Star Wars The Card Game)​
Needing to take on more men they grabbed what they could from ports and canteens once the ship was paid off, refiling up to 500. Over the next while they took a number of small jobs ranging from two man exploration up to fifty man raids. The next real job they had was on Tatooine protecting a hutt's spice shipment across the dune sea. As expected it was ambushed by other mercenaries and bounty hunters, inserting via drop pod they were able to cut down the ambushesers, at the cost of the 200 non-Damnatians.

(Star Wars Battlefront: Battle of Jakku Promotional Art)​
This prompted Jack to take drastic measures, he returned home, in order to attract the hardcore outdoors adventurer that made up the core of his outfit he hosted personal war games. This seemed to work, bringing the unit up to a strength of 500, as well he took up this more Darwinian method of recruitment permanently. This helped weed out those who didn't know what they were doing or those who were too weak and would bring the unit down. 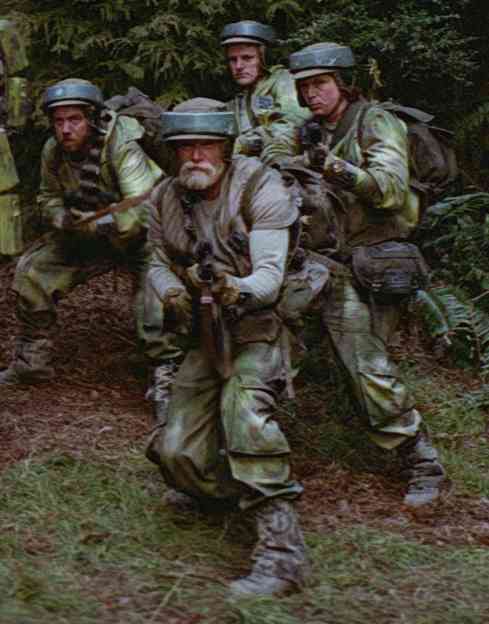 (Star Wars Return of the Jedi screen capture)​
The new methods allowed for a higher calibre initial recruit, once the same methods were applied to training between missions the abilities of the individual mercenary under Jack's command rose sharply, high enough to rival that of some of the best trained military units. The unit had signed onto a long term contract with The Dominion, as most military unit are trained for traditional large scale warfare the 701st provides a balance to that, their expertise in asymmetrical warfare on a smaller scale, and against a variety targets they are ready to prove that their unorthodox methods make them worth the high price. Once the Dominion fell Jack left with his mostly intact unit and ventured back out into the galaxy in order to seek glory and fortune.

Training and Recruitment: In order to be considered to join the 701st any potentials must take part in a set of war games lasting up to 14 standard days, during which they will be given supplies for approximately half of the expected time frame, that way along with competing the given objective they must learn how to gather supplies from the surrounding environment or steal them from their opponent. Each time the objective will vary, the defence/assault of a position, acting as a guerrilla/counter guerrilla force, or sometimes a straight up "death match". Once the fighting is completed data is gathered from on site observers, both live and mechanical, and those who show the most potential are given the offer to join.

In order to keep skills sharp active members of the 701st also take part in similar exercises, but more common is that groups will be inserted onto increasingly hostile worlds in order to keep skills sharp, newer members often are included in these as to be given the chance learn from the veterans. Training similar to that of a conventional military is also conducted and when not ground side there are arrangements made to keep prevent any skills atrophying; a portion of the ship is set aside for target practice, another is set aside for fitness routines, and still some of the non-essential portions are used to practice close quarters fighting as seen in cities and, of course, other ships.

You didn't fill this in.

As for the equipment I can come up with a example load out, or scrap and replace the non-standard gear weakness, the idea was for them to have a miss-match of gear unless an employer provides them with some.

Character Bio
I need you to provide a basic loadout otherwise this unit is as good as useless without weapons.

Character Bio
Status on this submission?

Character Bio
Forgot, but not abandoned, will update later tonight.

Character Bio
This submission will be on hold until that's done, then.

Tag me when you are ready.

When the codex is back open this is ready for further judgement.

Gonna need proof of purchase or a PM stating you're able to use these Closed-Market items, just for book-keeping sake.

Links have been added next to the weapon and armour in question in which the creators/sellers of the items give permission for use.