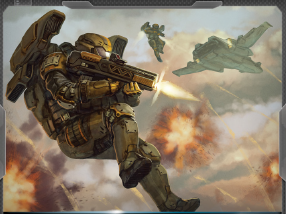 COMBAT INFORMATION
Jump Infantry: Everyone in the regiment is outfitted with Anakkona Heavy Armor that has an integrated Hush-About Jet Pack integrated into it. This allows them an unusual amount of speed and vertical maneuverability on the battlefield. It's not uncommon to see them deploy from high altitudes, using their jet packs to slow their descent to the ground, or to quickly scale up buildings or other obstacles.

Iron Discipline: Almost 90% of the Regiment is actually composed of Hopite Series Synthetic Soldiers. These biomechanical troops are loyal to a fault and have exceptional endurance compared to their organic counterparts. Consequently, the organic officers who run the regiment have little computation about giving them difficult missions or tasks, as the droids can oftentimes better physically endure the demands, nor is there any loss of actual life if they are destroyed in the process.

Overwhelming Offense: Jump Troopers carry a fairly high amount of firepower on the individual level in the form of flechette carbines, grenade launchers, and hand grenades, providing them with the means to quickly clear out small groups of opponents or damage infrastructure.

Burst Fighting: The 1st Jump Troopers primarily carry weaponry designed primarily to overwhelm their enemies suddenly through high firepower at the cost of limited ammunition. Likewise, their jetpacks have only a limited amount of fuel. They are consequently not suited for lengthy or protracted engagements.

Followers: Being composed primarily of droids with limited intellectual capability, the 1st is highly reliant on its relatively few organic leaders to provide the creativity to effectively react to oftentimes rapidly changing conditions on the battlefield. Killing the sole organic trooper in a squad can quickly degrade their performance not only because the organics provide the creativity and much of the unique responses to the conditions, but also severely disrupts their coordination.

Targets in the Open: While the jetpacks allow them a high level of mobility, they also fairly easy targets when airborne and their presence is expected: there is oftentimes no cover or concealment for their movements, and they often have to rely on rapid speed and surprise to survive their aerial movements.

Description: The 1st Directorate Jump Troopers Regiment are jetpack-equipped troopers who are specifically trained and equipped to assault and overwhelm enemy positions using rapid movements and heavy firepower. While initially compared to the old Clone Jet Troopers for their daring aerial maneuvers, the 1st JTR has since developed a reputation within the Directorate as unsettling, super-soldiers who strictly carry out Admiral Quee's orders to the letter, earning them the moniker “The Admiral's Fist”. Unknown to those outside the Regiment, most of the 1st Jump Troopers is actually composed of Hoplite series Synthetic Soldiers, which are human-appearing droids. Admiral Quee has striven hard to keep this fact concealed, stationing them within his own fleet and even then secluded from his other forces. This has served to only heighten the air mystique surrounding the regiment.

History: The Directorate began studying the concept of a high-altitude flying soldier since the group's inception, recalling the famed Republic Rocket-Jumper Troopers and the later Clone Jet Troopers. However, finding sufficient qualified volunteers that were capable of this service limited their employment to small field testing units. As these field testing units continued to study and refine the doctrine for this potential troop type, Lucerne Labs invented the Hoplite Synthetic Soldier, which finally solved the lack of qualified manpower. The field testing units were recalled back to Camp Shipwright on Hast and turned into the training cadre the newly formed 1st Directorate Jump Troop Regiment. Small groups of volunteer Directorate Marines along with the first large batch of the Hoplite series Synthetic Soldiers soon joined them, becoming the rank and file soldiers of the new unit. Despite being stationed at a secluded part of the camp, the 1st quickly attracted attention to itself because of their grueling training regimen and their own notorious running cadence: “Blood on the Bulkheads”, which details the death of a jump trooper whose jetpack was accidentally ignited while inside of a starship. Needless to say, this tradition combined with many of the 'recruits' one-dimensional, fully “amped up” personality (actually the droid's limited personality programming) gave the regiment a reputation for being grim and somewhat crazy. This unsettling presence largely kept other Directorate personnel away, further enhancing the secrecy of the Regiment's true, droid-based nature. Once fully activated, the 1st Jump Troopers was assigned to Admiral Quee's command, mostly to his flagship. The admiral seems to be more involved with the 1st Jump Troopers than many of his other ground forces. Aside from being more frequently seen with its leadership, the admiral has shown a preference for placing them at the forefront of engagements. This has garnered them much respect from many of their counterpart units, which in turn is largely negated by the admiral's tendency to employ them also for shore patrol duties: the 1st Jump Troopers follow the rules and regulations to the point, and cannot be persuaded or bribed for any infractions (largely because most of them are actually droids). They also tend to act the Admiral's honor guard for ceremonies as well as his personal security detail. These associations with Admiral Quee has led to them being referred to as “The Admiral's Fist”, in a half-parodied reference to Darth Vader and the original 501st.

Equipment: The 1st Jump Trooper Regiment's role as airborne assault troopers has largely dictated their equipment. All troops are outfitted with Anokkona Heavy Armor that has been outfitted and seamlessly integrated with a Hush-About Jet Pack, which allows the troopers to fly or descend onto the battlefield. The armor's vambrances are outfitted with a Dur-24 wrist blaster and a Magnaforce Personal Shield, which act as auxiliary offense and defense systems for the trooper respectively. A Hammerstrike Grenade Launcher or a Hailstorm Flechette Carbine serves as the primary weapon for a trooper, typically with a 50-50 ratio within a squad. While each weapon is well-suited to overwhelming enemies with bursts of heavy firepower, they also have different specialities. The grenade launchers provide the the troops with a variety of powerful effects while the flechette carbines are particularly good airborne interceptor weapons, particularly when encountering enemy surface to air missiles. Troopers are also given a number of grenades, which are typically used as their main source of indirect firepower, as they do not have any vehicles or artillery of their own.

Tactics: The 1st Drop Trooper's role as airborne assault troops has dictated almost all of its tactics. This role has thrust two important factors to prominence within the group's tactics at all levels: speed and overwhelming firepower. On regimental level, this manifests as rapidly deploying troops from low orbit, sometimes even directly from capital ships, which includes taking into account the relative speed of the launch vessel and the world's rotation. By factoring these two variables together and relying on the trooper's individual inertia, it's possible to deploy troops without endangering the launch ships to direct counter fire from the target site. To aid in this, the 1st command staff frequently coordinates closely with the command crews of capital ships to provide precise, initial orbital strikes to support the landings. A strategic level, the regiment's elements are designed to deploy almost on top of their targets and even then remain almost in direct line of sight of other regimental elements. This means that they are often dispersed on a battlefield, each can rapidly respond to and reinforcement other elements if heavy resistance is encountered. The 1st command staff often coordinates these actions, led by the circumspect Colonel Sal Saar , a leader more renowned for his quiet competence and predictive abilities than battlefield theatrics. On a smaller unit level, squads of drop troopers frequently use coordinated bombardments of flechette carbines and grenade launchers to try and overwhelm opponents combined with their arrival to catch their opponents off guard and in the open before moving in to mop up in two or four man elements. In particularly dense terrain and/or areas where collateral damage is a cause for concern, it's not uncommon to the troopers almost act as precise aerial bombers, flying in just close enough to toss or drop a grenade with precision in a small area. Another tactic particular to the 1st Jump Troopers is using their flechette carbines to intercept surface to air munitions, a difficult feat accomplished by using the expanding cloud of flechettes, their helmet's own targeting system, and countless combined arms training sessions over Hast. In part because of their limited ammunition and the expendability of most of their troops, the 1st Jump Troopers favor being quick and decisive actions over careful maneuvering and probing. After all, many times their mission is simply to seize and secure a landing area for other troops, who then carry out much of the rest of the fighting.

Deployment: The 1st Directorate Jump Troopers are subordinated directly to Admiral Quee's mission to the Silver Jedi, and thus travel and deploy almost exclusively with him. That means that most of the time, they are stationed in starships or space stations under Quee's command. Groundside time is usually pretty quick and fleeting, lasting only until the area has been secured enough for more conventional (and better equipped) troops to more permanently hold an area. However, Admiral Quee does occasionally detach up to company-sized elements of the group to support allied missions or to provide extra security to VIPs with whom his relationships with, such as several ambassadors whose nations are part of the ISAF.

I can't find/see the image since the website asks for a password. Could you find an alternative source?

Character Bio
[member="Arekk"], sorry about that, I completely forgot that I'm logged in over there.

I can't find an exact copy of the image there on a different site, but I can show it to you from a different angle. The card is here in the lower right corner of this image, found in this lengthy blog post a little under halfway down the page.

Let me know if you'd prefer me to edit the image credit accordingly.

Character Bio
What you've posted is a better alternative, go ahead.