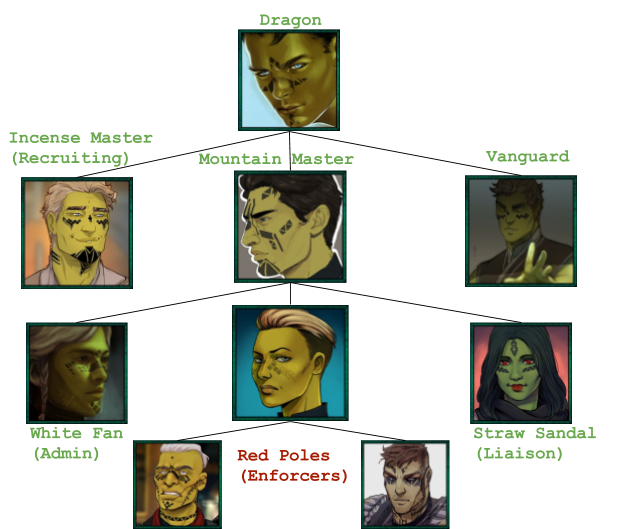 [background=While the Triad is a criminal organization, its members see themselves as part-businessmen, part vigilante. And to a certain extent they do keep order in the Uscru District. Fights that break out between them and other gangs are usually gunless street fights that do not result in death.[/font]​

[background=The Triad and Lin Tech are to a certain extent one and the same, they go to great lengths to ensure that the executives in Lin Tech are not seen doing Triad business by law enforcement, or the public.[/font]​

[background=Most of the Triad lieutenants are Force sensitive and all have trained in Matukai, or Zeison Sha martial arts. The belief in the body as a weapon is quite strong and to this end most Triad members elect to use hands and feet, knives, or other melee implements instead of guns.[/font]​

[background=[b]Membership:[/b] All members must be Mirialan. Initiation requires a four day ceremony, involving many rituals from both Mirialan culture, the Matukai, and the Zeison Sha.
[background=[b]Dogma/Doctrines:[/b] The Triad is based around family and family comes first, no matter what. Second to family are the people of Mirial. These duties are preeminent, even to the laws of society. Turning on the family is considered the ultimate betrayal.
[background=[b]Curios:[/b] Dragon tattoos. Two claws for soldiers, three claws for lieutenants, four claws for the captains, and five claws for the Dragon.
[background=[b]Goals:[/b] Control the entire Uscru District. ​
[background=MEMBERS[/font][background=HISTORICAL INFORMATION[/font]

[background=The Triad came to be when the Lin family immigrated to Coruscant several decades ago. Power seemed to shift hands daily, from Jedi to Sith, and the immigrants - taken advantage of by corrupt politicians - could not rely on the law to protect them. The Lin brothers, Bei and Bao, formed the triad to protect their people at around the same time they formed the first incarnation of Lin Technologies. At first they just protected their business from would-be burglars, but other people started asking them for protection. The Lin could not protect everyone, so they enlisted the help of others. They also needed to pay members for their time, which required money. They charged a low fee in exchange for protecting businesses and homes from burglars, break-ins, and other street gangs. [/font]
[background=The Triad grew as Lin Technologies grew. To stay competitive, the Triad used Lin Tech to produce counterfeit currency and hacking software. They sold other cutting edge technology to military entities across the galaxy. Most legal. Some not. Eventually, they moved into the energy sector, forming the Solar Energy Corporation, with facilities on three planets and plans for more. All of that was cut short when Lin Bei and his wife died in the tragic outbreak of violence that left Kai orphaned, but not without family. While Kai disappeared, in mourning, his uncle tried to run the business, but while Bao was a good natured man he did not have the acumen of his brother. The corporation started to fail. [/font]
[background=Kai returned after training with the Zeison Sha to assume his fatherâ€™s place as the Dragon. He discovered many secrets upon attaining the rank of Dragon, including the darkest one of all. The secret that threatened to destroy their entire familyâ€¦ and the Hutt Kajidic who threatened to unveil it unless he did as bidden. [/font]