This 2017 American computer-animated comedy, based on smartphone emoji symbols and apps, is directed by Tony Leondis and features the voice talent of T. J. Miller, James Corden, Anna Faris, Maya Rudolph, Steven Wright, Jennifer Coolidge, Christina Aguilera and Sir Patrick Stewart.
Do you hear that? That is the sound of a thousand terrible critics coming this way. If they find this review, they will crush it, grind it into tiny pieces and blast it into oblivion. When have I ever shied from unfavourable reviews or thoughts? Never, and it will be no different here.
To start things off in case you donâ€™t want to carry on; I personally was more entertained by â€˜The Emoji Movieâ€™ than â€˜La La Landâ€™ or â€˜Moonlightâ€™. Still here? Ok I wonâ€™t go on too long, but safe to say, really, this film is NOT that bad!
Yes, itâ€™s devoid of anything new, original, ground-breaking or revolutionary, but what is? Iâ€™ll give them the fact that theyâ€™ve taken audioless and motionless digital images and created a short and snappy kids film with enough imagination to fill 85mins. I am sure many of a certain age/culture will loathe the use of emojis in modern society, but they are a global form of communication now that is recognisable in any circumstance. Lazy? Yes. Immature? Partly. Important? Of course. This is just the way technology turns for the modern generation. And also the cash-cow of Hollywood to make money on it.
Itâ€™s a very basic story done to death â€“ loser and loner hero traverses a dangerous and colourful world with a dopey but engaging sidekick, meets a potential tough-talking romantic interest, avoids death at numerous times, defeats the big bad villain, proves he/she is more than he/she/the world thought and save the city/population/world.
Many kids films follow the same pattern and caters to the target audience of under 10yr olds. Adults want to enjoy these films too, of course, but at the end of the day, the kids are the target and the ones who will buy into the products, toys, games etc. â€˜The Emoji Movieâ€™ is what â€˜Toy Storyâ€™ did 22 years ago, but instead of action figures and dolls, it channels smartphone games.
If a child doesnâ€™t know what Twitter, Instagram or YouTube is, then director Tony Leondis wonâ€™t tell them. They are used here in places, but never mentioned. Games are mentioned and used, yes, but never social media platforms which I think is good. Children are far more in touch with tech than we older ones want to think, and that films like this are a poison to their imagination, but they are seeing nothing they donâ€™t already know about. My 6yr old Autistic son can navigate around YouTube for hours of safe entertainment. He doesnâ€™t know the name, but he knows the programme we have allowed him to use. â€˜The Emoji Movieâ€™ doesnâ€™t force anything down anyoneâ€™s throats bar a few harmless games. Who doesnâ€™t like to waste time on a smartphone game anyway? Itâ€™s product placement, just like we have in thousands of adult and childrenâ€™s films today.
As you can see, my irk in the easy backlash to this film is that itâ€™s lazy and targeting kids for products. The story isnâ€™t new, but itâ€™s giving kids some dumb entertainment in an environment they sure as hell know a lot more about than us, and probably even use more. They all know what an emoji is and what smartphones and games do, so why pretend they donâ€™t? Itâ€™s a fast, frantic and fun film that doesnâ€™t break the mould at all and it is not perfect and does have some low points, but itâ€™s nothing as â€œtoxicâ€ as people say. Itâ€™s full of vibrant colours and plenty of action on every scene to keep kids glued to the screen, and there are a good amount of pratfalls and chases to entertain them.
Our voice talent do a good job, with plenty of enthusiasm injected into their roles â€“ standouts for me were James Cordon (I canâ€™t see how his character is compared to Jar Jar Binks?) and Christina Aguilera â€“ she just has a voice that is nothing but powerful! And the inclusion of a toe-tapping dance number to â€˜Wake Me Up Before You Go Goâ€™ by Wham! is nothing sort of fun.
The plot has been done to death, and there are many characters that arenâ€™t needed and just pop up for comedy sake or simply help market the film. Sir Patrick Stewart as Poop is harmless and will get the kids laughing â€“ which child wouldnâ€™t find talking poo funny â€“ but he doesnâ€™t add much. Same for SofÃ­a Vergara too. Blink and youâ€™ll miss her. With so much material, they just cram so much in. You just know there will be a sequel on the cards for the emojis left behind.
So, yes. It WILL divide opinion and WILL cause lots of debate.
Itâ€™s a VERY easy film to pick on due to the seemingly lazy source material and the sake of a film made to just make money. But, again, isnâ€™t every film made to make money and kids films to sell toys and games and sweets? Some just present the package slicker than others. Sony Animation isnâ€™t on par with Pixar for their emotive morals and memorable characters, but itâ€™s doing nothing different in reaching kids and simply having some dumb fun with them. Iâ€™ve seen far worse films than this in recent years, and will see worse yet to come Iâ€™m sure.
Now â€“ bring on the backlash! 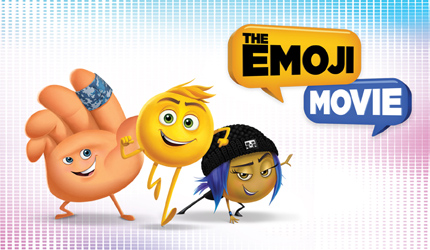