THE ONLY CHAPTER
​
I am guilty of many things, but I think that's what me and you can relate on, poor person I suckered into reading this. I think that's why you even bothered to pay me a visit. We have a lot in common. We're both here, at Chaos. I think you might enjoy the place, if you stuck around for more than this drama laced blog post. But we also both don't care if you like, wanna go do other stuff.

That's cool. I'm not obsessed with you, nor you with me. I don't occupy real estate in your brain, nor you mine - we have a pretty healthy relationship. You want to roleplay. I provide the place. You want to do it in a peaceful setting, the Staff team provides the peace. You want to not deal with the troubles of the world and just immerse yourself, and we help ensure that can happen.

But occasionally, our community needs to address some real issues. Rules that this guy, and so many others, will never adhere to.

Accusations are so dangerous, especially in this day and age. They're unwieldy and they are wildly successful in the court of public opinion. All you have to do is make something up, and there it is, now it's in your brain. "Tef's a sexual predator." Boom, got him, I ain't explaining shit.

Imagine if I put you, reader, on full blast right now for something you know is a lie.

Imagine it was so vile and repulsive. And you knew all your friends, maybe some of your family were reading it.

Right here in front of god and country.

How would you feel?

...but we've never done that, right. Definitely not on discord, right.

Definitely never did that.

So, I went to go visit Random Discord Lawyer Guy. And this is the part where I don't release the full raw logs of our conversation. I blocked him, seeing no road forward in THAT discussion lol, and went to TGC's discord to thank Staff for their time to talk about how there was no beef. A bit of context: I saw him popping off immediately but he was blocked, so I wasn't seeing what he wrote at first. WARNING: I do get a little "hot under the collar" in the following shots. I don't wish to sway the mind of anyone still reading this sad cringefest, but at this point I've already talked to "sorry for mistaking you for the guy who threatened my family" guy. Almost at the end. Another reminder, we're in a public discord, not a private message. After this, TGC Staff rightfully intervened as it was their Discord, I apologized for the disruption and left.


Accusations are dangerous, and they spread like weeds. They need to go to people who are held accountable for their responses. Not this guy.

And not you. Not the mob mentality. That's not justice.

I've shown you just one day of how it looks, and I'm very capable of dealing with it.

I'm just asking you to please think. I've seen you worked up. You say "that guy's deranged",

absolutely dismissing that you could ever reach that level.


But you have, haven't you.


And even after you can see the toll it takes, the damage it does...

What if you are wrong?

It's the age of baseless accusations and mob rule. Sad!
How 2 Spacer Trash​
Lol. Valiens be like, don't put me in your blog. #Savage
FFS. Again I apologize for the bits of this shit above i am responsible for.

And strangely relieved that anything ive ever said or done doesn't even touch the depths of this person's poodoo.

Damn Tef. Youre a saint. Love your work.

Kaine Australis said:
FFS. Again I apologize for the bits of this shit above i am responsible for.

And strangely relieved that anything ive ever said or done doesn't even touch the depths of this person's poodoo.

Damn Tef. Youre a saint. Love your work.
Click to expand...

I am curious, though, if the ones you owed an apology to the most ever got it.

Work on yourself, and work on the meaningful stuff - the stuff we don't do in public. That's how you earn the second chance we gave you here.
Don't engage people who make baseless accusations against you. Ignore them. The problem with today's guilty until proven innocent culture is that we keep engaging the people who use that mentality and then they feel justified. He has nothing on you and you know he does. If he makes threats, screenshot them and take them to the authorities. I have seen this happen on Twitter and the authorities always tell the person to disengage from the person making threats.

Barrien Siegfried said:
I have seen this happen on Twitter and the authorities always tell the person to disengage from the person making threats.
Click to expand...

I respect your opinion. I respect the authority's advice. Depending on the situation, I do think it's generally good advice.

In this case - and many of the others before it - I found it not applicable.

Tefka Yeah, multiple times. To the point the person addressed me directly to say they weren't going to accept it and to stick it up my ass. Which is fair enough.

I regret that other people continue to deal with the results.

This doesn't fly anymore. Ask any person who has been slighted just for being who/what they are. When bad behavior is simply ignored, it gives the slighted group/people the impression that there are no consequences for their bad behavior.

And I don't mean to call you out specifically. But the "ignore the bad behavior" culture is the exact reason why the bad behavior persists, not a reason for why it goes away.

Don't ever stand for being disrespected. And don't let the people you call friends to sit idle while you are disrespected. Hold everyone accountable. That's the only way that we as people will improve our communities.

Even after 6 years on the board, I don't really know you all that well, Tef. But I can say that no one deserves to be spoken to that way and I respect you for calling it out (even in spite of your click-bait-y-ness).

Darth Metus I wasn't talking about you mate. You can talk or keep doing laugh reacts. Either works for me.

Tefka
I regret that other people continue to deal with the results.
Click to expand...

Wish I had words to help with the problems you caused and ya'll endure, but I don't, and you're on your own.

I have dealt with this personally. Ignoring them works far better than engaging. They tend to get worse when you engage. When you ignore them they eventually get bored. And again, authorities advise against engaging.

Tefka I appreciate the second chance and the continued opportunity to RP here. Things were tough for a while, as it should be. This community doesn't condone that kind of behaviour, nor should it. Know that the opportunity has been used wisely, and things have never been better. Apart from one or two folks, the Chaos community has been very forgiving, and i've noticed that most people have moved on with their lives.

Hope things are good for you too.

I might not always agree with you but you are very much someone I can respect and you listen to pretty much everyone. I don't know how that should have any ground to stand on aside from him just screeching at the top of his lungs. 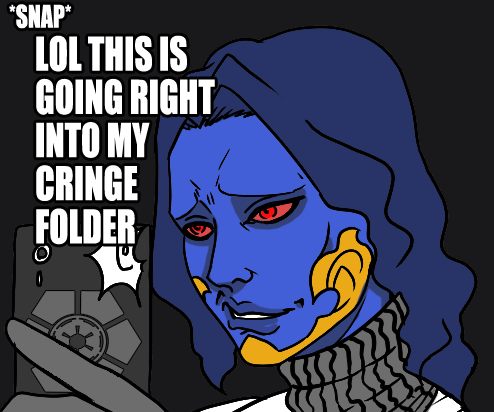 ​
I myself have been falsely accused of plenty of things. Whether its been calling me a predator or claiming I have alts or such, and I agree the best way to deal with it is to drag everything out into the light. I respect that, and I hope everyone has to deal with less nonsense in their lives.

That’s insane. All revolving around a forum role playing website. Treat people based on your individual experiences, remember were all trying to have fun and respect should be fundamental.

This is my favorite anime, hands down. This blog post needs to be picked up by funimation.
Company | Ship | Storefront​
My advice is just love on the BLOCK button. Life is far too short to judge yourself based on anyone else's unfactual standards.