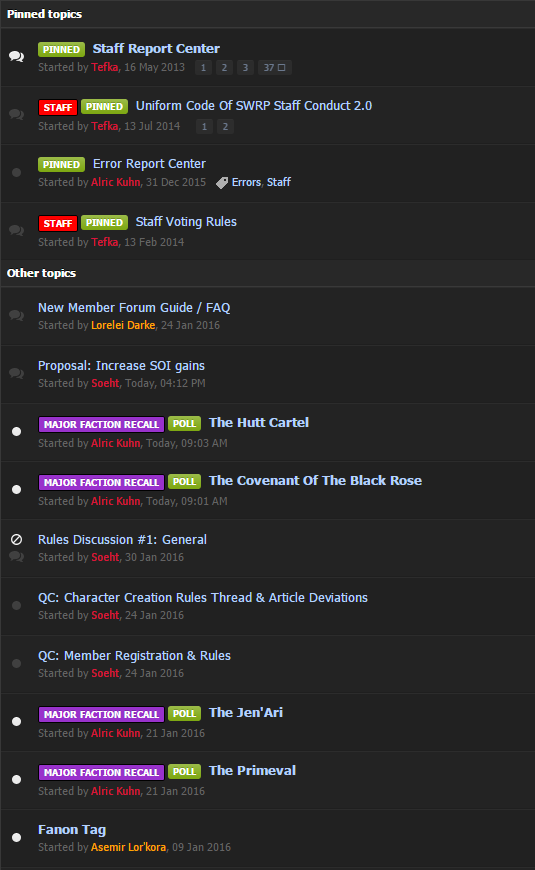 Abbreviations:​
SOI = sphere of influence​
QC = quality check​
So, Soeht was brought on the Staff team to help me assess the current standings of our current rules and work on organizing the team to update them. I want to thank him so far for his work.
You'll also see Alric, doing his job. While the RPJs function as the main body of Staff, handling most member relations in regards to IC events, the Admins usually have specialities. Spencer for the Factory Admin, Valiens for the Codex Admin. Alric &amp; Thurion are mainly our "Faction Admins", in relation to the Staff team. Alric has a bit more on his plate though (soon to scale him back to offload some of the work, as he does quite a lot) - you'll notice he handles the map updates and above you'll see he initiates Staff's votes for the recalls.
On that note, while recalls can sometimes be a sad thing - I find that their implementation has been successful and by far one of the best ideas recently this team has come up with. I think they work a lot better than the faction check-ins, and are much more "real". It's easy to check in for a faction - but as we noticed, it wasn't a substantial measurement for activity. It's been serving as a wonderful "warning system" for 'hey, you're inactive right now'. Sometimes it works. Sometimes it's the nudge a FO needs to toss in the towel when he otherwise wouldn't. Either way, it paves the way for new factions to swing in, which is what was intended.
Either way, not a whole lot of game-changing discussions going on except maybe the SOI discussion. We're debating trying to lessen the "tentacle effect" on the map, but we're not really headed in any particular direction. It's nothing more than a proposal, no vote has been initiated.
As for the rules discussions, nothing major is being added. We're really just discussing cleaning up our templates and further streamlining our rules. Not quite as exciting as some of the Staffers want the conversation to be, with talk of "Super Dominions" and "Rebellions" looming on the horizon, but once we get past the boring stuff I've promised we'll dive back into major changes coming to the map game to make it even more interesting.
Boring stuff first. Rage inducing game mechanics later.