Our Kind Of Traitor - May

Following on from â€˜Tinker Tailor Soldier Spyâ€™ which I failed to connect with, and recently â€˜The Night Managerâ€™ which I enjoyed, the adaptations of le CarrÃ©'s work seem to either hit a high note from the off or remain slow and tepid â€“ this sadly is the slow and tepid kind, and I would have much rather seen â€˜TNMâ€™ on the big screen than this Sunday night-esque 100min TV drama.
Certain types of thriller donâ€™t need to be balls to the wall action and Bond-on-a-budget to work, but they need to compensate that with an engaging story, escalating threat and a top notch cast to hook you. Iâ€™ll break this down into those areas.
Story â€“ simple enough to follow and one that works; itâ€™s relevant, itâ€™s identifiable and makes more than enough reference to current political hot-spots.
Threat â€“ something that I didnâ€™t find TOO major, in terms of the real story, because I imagine corruption is rife in London and other capital cities so this wasnâ€™t a topic that thrilled me or seemed very different. The threat, however, was more to the characters than the overall final result.
Cast â€“ on the whole they fail to sizzle.
McGregor and Harris are too comfortable in their role to suddenly help a Russian mafia boss and it doesnâ€™t take long before they are in on the game; they didnâ€™t seem to convey anything out of the ordinary about this situation and bar Harris having a few good moments, it sadly was a rather limp pairing which is a shame as McGregor is capable of more.
Damian Lewis is hard to place in 2016, looking and acting more like he should be in â€˜TTSSâ€™ with the 70s attitude, glasses and style he conveys and the tight-lipped accent. Itâ€™s Stellan SkarsgÃ¥rd who steals the show with a great journey for his character, and one who is a brash and loud and at times brutal enough to suck you in and always make you question his standing right until the end â€“ you care for him and his family and his story more than anything else. A great role, and the crux of the whole film.
The action is sporadic, a few shoot-outs and fights, nothing really exciting and it feels itâ€™s only here to remind you of the â€œthreatâ€ our ordinary couple face. The final 10 minutes prove to be the most thrilling in this thriller, and itâ€™s a shame because it starts to look and feel like a genuine thriller, but then itâ€™s over.
In places the film looks good, at times disorientating which is fine in mirroring that of Perry and Gailâ€™s world, and the locations are used fittingly â€“ Paris, London, Marrakech and the Swiss Alps. Itâ€™s not Bond-on-a-budget at all, and really doesnâ€™t have anything memorable to offer or bring you back for another viewing. While the cast do try, itâ€™s not enough to cover an ultimately slow paced story where people give each other suspicious looks, hide, run, give more suspicious looks and plot about who is watching who. 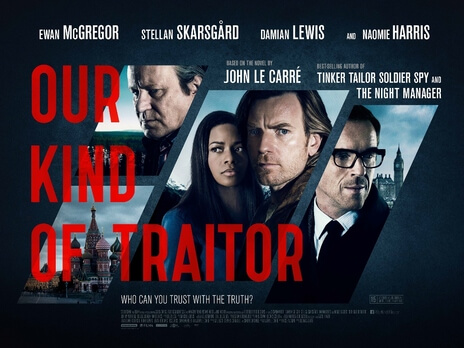