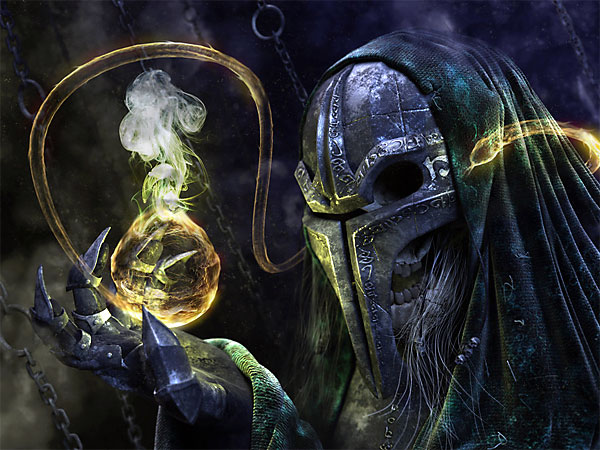 Age: Unknown believed to be well over 12000 years

STRENGTHS AND WEAKNESSES (Required: 2 Weaknesses Minimum) :
+ Powerful Imagination
+ Naturally strong in the Force
+ Powerful Force illusions - "no one viewing a Croke in illusory form was able to penetrate the disguise unless the Croke became stunned or lost consciousness."
+ Seemingly Invincible Avatar which he controls with levitation
+/- Terrifying presence (in most cases)
- Can be stepped on
- Over anxious

Secondary Avatar: Va'thek has another image he projects on not too many... only about 1 in 4 will see his Mandalore with flesh. Tanned skin, harsh eyes, dark hair. He uses this form for those who would follow him out of charisma than fear.

BIOGRAPHY:
Va'thek has witnessed eons go by and he is wiser for it. He has posed as many life forms over the decades. Some he created and killed like Darth Bandon. Others he merely posed as, such as the likes of Luke Skywalker. However ever thousand or so years he pulls out one of his favorite creations... Mandalore the Undying.

Mandalore is more of an extension of Va'thek than any other creation. His body the decomposed visage of a true Mandalore. He has reeked hell on the Mandalorian power structure every time he returns and claims his right as leader. He has lived so many lives it is impossible to list them all but the one thing Va'thek craves above all else is power... and if he has a little fun tricking people along the way so be it.