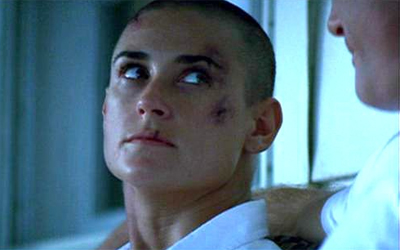 ​
"This is it, boys - this is war. What are we waiting for?"​
NAME: Jodi Chapman; prisoner #32156724 (formerly known as Carol Hendrix)
FACTION: Time Runner
RANK: Bounty Hunter
SPECIES: Human
AGE: 31
SEX: Female
HEIGHT: 5'2"
WEIGHT: 122 lbs
EYES: Gray-brown
HAIR: Dark brown, buzzed short
SKIN: Fair
FORCE SENSITIVE: No
---------------------------------------------------------------------
STRENGTHS AND WEAKNESSES:
Street Smart - Chapman grew up on the streets, relying primarily on her own wits to survive.
Ruthless - Chapman doesn't care if people get in her way. While it makes her more likely to finish a goal, she's more likely to get shot in the back by any partners she might be working with.
Unstable - Chapman is uh, not all there mentally, and her judgement sometimes suffers as a result.
Holds a Grudge - Chapman, uh...doesn't let things go very well, to the point where it causes problems.
APPEARANCE:
Jodi Chapman is very short and very strong. When she was younger, her brown hair never grew out much past her shoulders, but since the military she's kept it buzzed short and out of the way. During her years dealing with the Coruscanti gangs, she got into the habit of sharpening her teeth to ensure that was never completely unarmed. She has fair skin and dark eyes, and often has some manner of cuts or bruises on her face from getting into one fight or another.
BIOGRAPHY:
Jodi Chapman's first memory is falling, with the face of a man known as 'The Life-Day Napper' swimming above her. She was eight.
Landing in the unforgiving streets of lower Coruscant, Jodi was taken in by an old man who taught her how to steal, how to use a knife, and how to survive. As Jodi grew older, she became more involved in his business of supplying the local gang with weapons and speeders.
When Jodi reached the age of 18, she enlisted in the Republic Military in an attempt to escape the Coruscanti Underworld, but she chafed under the strict rules and regulation. Nevertheless, she stuck around despite numerous confrontations with her superiors, she managed to claw her way to the rank of Sergeant and earn a reputation for ruthless efficiency before the captain of her unit started investigating her activities. What he found were corpses - enemy soldiers, comrades, and civilians alike. Horrified, he turned her over to the courts and she was sentenced to life in prison. A life sentence at 22 - not something to be proud of, in most circles.
She spent seven years behind bars before being brought into the Time Runner program. Her first target was a crime lord's lieutenant on Tatooine, her second was his boss, and her third was a low-level gunrunner in the wrong place at the wrong time. Since then, she's been slowly killing her way around the galaxy, storing up time on her clock until she has enough to find the man who threw her into the Underworld - the Life-Day Napper.
SHIP:
-
KILLS:
-
BOUNTIES COLLECTED:
-
---------------------------------------------------------------------
ROLE-PLAYS:
-