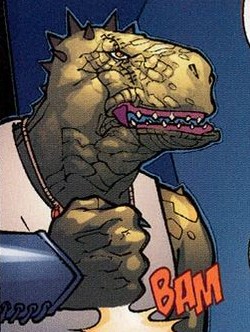 Horthek Jaravos, previously a member of the Intelligentsia, long abandoned his fellow Yinchorri and began to lead a group of raiders, specializing in the acquisition of and selling advanced technology and weapons. Dossiers are sketchy, as he's never been caught before, but reports suggest that he is around 2.5 meters in height, has the strength to outwrestle a wookiee, and is a crack shot favoring disruptors weapons. His crew is rumored to be anywhere from 40 to 80 deep, mostly filled with reptilians species such as Trandoshan and Barabel. He is a cunning target who has evaded multiple galactic governments and is a noted hand in the arms dealing of the black market many would rather have removed. Extreme caution suggested in taking him down.