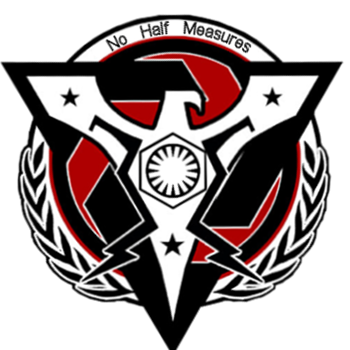 "No. Half. Measures"​
-ALPHA Team's Motto​
OUT OF CHARACTER INFORMATIONGENERAL INFORMATION

SOCIAL INFORMATION
Hierarchy: Membership:Dogma/Doctrines:Curios: Goals: MEMBERSCOMBAT INFORMATIONStrengthsWeaknessesDescription: ALPHA Team of the First Order Special Forces' Special Warfare Command Group/Four is the Military's elite team of "Death Troopers" Soldiers who have been physiologically augmented to elevate them beyond what is considered Human, complimented by training that has been tried and testing across decades of history; First with the Galactic Republic and then the Galactic Empire and now the First Order. ALPHA's membership is diverse and varied with only the team's Sniper Kyli DT-6767 being a child "volunteer" Hailing from the Stormtrooper Corps while Luther Ando was an Adult Volunteer originally from the First Imperial Army with Rexus Wenck and Dergan Twigg being once-disgraced war criminal adult volunteer Stormtroopers who earned some measure of redemption after their conscription back into the Stormtrooper Corps. Together the four Troopers became the First Order's initial candidates in Project: AFTERLIFE which has permanently changed them from mere Human warriors into something much more deadly and dangerous.

While the concept of the Death Trooper is centuries old the First Order never truly embraced it, if ever using augmentation technology in the past it was based on out-dated procedures developed under the Galactic Empire's reign. ALPHA team are the first true Death Troopers within the First Order with entirely new technology both in their equipment and Physiological Enhancements making them more than a match for any threat on the modern battlefield including trained force wielders. Project: AFTERLIFE came to life on Mephout within what's called "The Dead City" Deep beneath the city there is a First Imperial Military facility and this is where the members of ALPHA Team were changed forever becoming the Death Troopers they are today within the secret and shadowy laboratories surrounded by Doctors and other Professionals who came at the subjects with soft re-assuring voices that what was to become of them was for the greater good of the First Order. To prove their superiority to all other Troopers within the First Order; after recovering from their augmentations ALPHA Team were inoculated against the Blackwing Virus and then sent deep into the Dead City and fought off hordes of Undead and returned to be successfully decontaminated without a single casualty; a notion that prior to this would have been deemed unthinkable but ALPHA Team passed their test admirably and proved to be worthy of the mantle "Death Troopers" and have quickly been elevated within the First Order Military as the Paragon of Human Achievement and Harbingers of Sieger Ren's Order.
Within the First Order Military itself ALPHA Team are met with a mixture of fear, awe, respect and derision depending on the individuals, typically fellow Special Forces Troopers both envy and deride them as "Freaks" for their superhuman capabilities or "Kark Squad" for their ostensibly casual attitude when off-duty where certain members of the team enjoy partaking in activities that would normally be frowned upon or prohibited for regular special forces and military personnel. The rank-and-file soldiers and stormtoopers usually aspire to follow their example, particularly the latter who have been found to generally regard ALPHA highly. The Missions ALPHA Team perform vary wildly and are capable of fulfilling any operational special forces role as necessary; Covert, Clandestine or Direct Action Operations? ALPHA can do it all and admirably. The Order of Ren and Central Command both frequently requisition ALPHA Team's services and they can be found all across First Imperial Space and beyond when deployed often performing Operations that most of their Special Forces Peers would describe as suicide; such as fighting through a city filled with ravenous, intelligent undead. ALPHA Team is both derided and admired as the "Kark Squad" because when everything is farkled you can still count on them to get the job done or die trying. To protect their personal identities each Death Trooper's holotags and redacted personnel file doesn't feature a last name and instead exhibits their DT-Number which is usually their previous servicenumber with the alphabetic letters replaced with 'DT' for 'Death Trooper'. This is to help prevent foreign Intelligence agencies or insurgents from attempting to track down the Death Troopers when on leave or otherwise engaged in private activities.
DISCLAIMER: Based on the posts made by Zeradias Mant and Allyson Locke here and here I've concluded that this unit is not yet suitable for submission into the Codex and will likely be submitted at a later date. Currently it is based off the NPC Combat Unit template with additions from the NPC Group template to achieve the fidelity of information I desire.