BOTM VICTORY ON FELUCIA
A huge thank-you to all of our invasion opponents for making this a great story!
​ 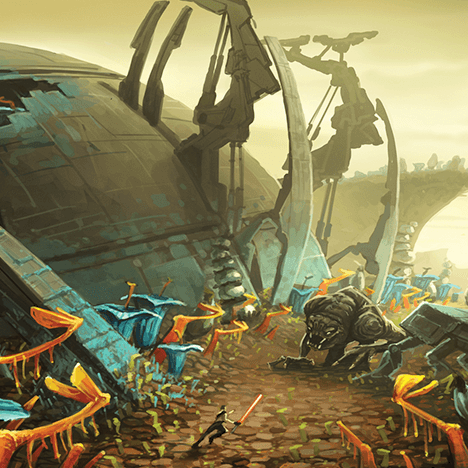 In the wake of the Battle of Csilla, the Brotherhood of the Maw was victorious but bloodied; they had punched out the united forces of the galaxy, but they'd broken an arm to do it. The loss of countless marauders on the planet's surface, along with the Mercy and the vast bulk of the Maw fleet, had badly weakened them, to the point that their campaign against the Core could not continue until they were resupplied. With the handful of industrial and resource-producing worlds under their control not up to the task of fully replacing their tremendous casualties, the Brotherhood began to send out raiding parties, striking vulnerable worlds to steal what they needed to rebuild their strength.

Had the decision of where to launch these raids been left up to the marauders and warlords, they likely would have limited their operations to Chiss space and the western Unknown Regions, perhaps attacking the planets along the Galactic Alliance's northern frontier. But a secret evil influenced their decision making: the New Sith Order, headed by Darth Solipsis. The Order championed a return to Darth Sidious's strategy of manipulating the galaxy from behind the scenes, and swiftly declared all other Sith to be heretics who had departed from this true way. In order to prove his order's strength and strike at his rivals, Solipsis selected a different target, one halfway across the galaxy.

The target was Felucia, breadbasket of the Sith Eternal. As a raiding site, it made a certain amount of tactical sense. The planet was home to rancors and other fierce creatures, the kind of beasts that the Brotherhood could readily tame and press into service to ravage their foes. It was also the site of huge nysillin plantations. This healing herb was of particular interest to the Maw, as it would cut down on their casualties and attrition. They had no ready source of bacta or kolto, so an herb with flesh-knitting and painkilling properties would be a tremendous asset to their future campaigns. Seizing as much of it as possible, along with sprouts to attempt cultivation elsewhere, was a top priority.

Of course, all of this was merely cover for Solipsis's desired confrontation with the Sith Eternal's feudal lords.

The Brotherhood could not spare a massive invasion fleet; quite simply, it no longer had one. Instead a small raiding force was dispatched, with the goal of slipping in under the planetary lord's detection, then using speed and stealth to complete the attack. They could not have timed their arrival more perfectly. At the same moment their ships broke Felucia's atmosphere, the planet was under siege, a contest of strength between two Sith Eternal warlords. Darth Vulcanus's Graug horde was burning Felucia's jungles, ravaging its landscape as he tested his strength against the local ruler, Lord Grundark. Using this battle as cover, the Brotherhood raiders touched down undetected.

The Mongrel and the witch Tegan Starfall led a detachment of raiders to claim one of the largest nysillin plantations, quickly eliminating the guards and rounding up the workers before the alarm could be sounded. Their only opposition turned out to be a netherworld being, the pacifist shadow cat Dis, who attempted to bargain for the lives of these hostages. Dis and Starfall went back and forth several times, until the cruel witch decided that the creature had nothing to offer her. She callously detonated every last one of the plantation workers, reducing them to atoms. The nysillin fields and warehouses were looted, their produce loaded onto Brotherhood heavy transports.

The raiders burned whatever they couldn't carry with them, so as to deny it to their foes.

At the same time, the Brotherhood's Athysian allies landed nearby. The Raider-Princes of Athys were less cautious, openly burning a huge swath of jungle around their warcamp. They looted and pillaged many farmsteads and plantations, charring the fertile breadbasket of the Sith Eternal to ash. The columns of smoke they sent up soon attracted attention, and an agent of the Sith called Firrerreo discovered their camp. Firrerreo killed many raiders, both Athysian and Brotherhood, with his powers of pyromancy. Although he appeared to have been decapitated by The Mongrel, ending his threat, this was actually a Sith illusion, and he survived to bring warning to the Sith Eternal defenders.

At the same time, Taskmaster Tu'teggacha set off into the ancient rancor graveyard in search of a rumored Dark Side artifact there, as well as the opportunity to capture powerful rancors. Kyrel Ren, Khaostra Devoid, and Tarok Vassket, powerful champions of the Maw, also ventured in. As he searched, Tu'teggacha soon encountered a Sith Eternal acolyte drawn by the same rumors: Ana Maxilar. Initially the two fought as Tu'teggacha struggled to keep her from warning the defenders, but they came to a surprising agreement, and began to hunt through the graveyard together. They even joined their powers to subdue an ancient rancor, though they were aided when Kyrel and Khaostra returned.

The battle attracted the attention of the mighty Darth Arcanix, who brought with her a jungle felucian army. But before the Maw and Sith could come to blows, the drengir Eldervine suddenly erupted from the earth, seeking vengeance on the Sith for itself. Many of the combatants fled as the plant monsters emerged, leaving Arcanix to confront them. With their presence clearly discovered, the Brotherhood loaded up their transports and prepared to race past the Sith Eternal fleet, hoping to escape before the overwhelming might of the defensive armada fell upon them. But there was one more confrontation, the secret reason behind it all, that was still playing out.

While the mighty Zachariel Steelblood and his trusted lieutenant Kryll took advantage of the chaos of the clash between Grundark and Vulcanus, capturing a gun emplacement to rain down artillery on both sides, shadowy presences began to gather. The Warlords of the Sith, old allies from Csilla, reinforced the New Sith Order as they slipped in among the dueling warlords, and there was a terrible clash of dark power in the midst of the ground war. Ultimately, Darth Solipsis interrupted a duel between Darth Vulcanus and Darth Maliphant, forcing them back with torrent after torrent of Sith lightning. His presence known, he made his ultimatum: join the New Sith way, or be swept aside.

With the goals of the raid complete, the Brotherhood escaped into hyperspace, leaving ruin behind them.
Reactions: DarrVack, Maestus, Yula Perl and 17 others

Congratulations guys! I really enjoyed the game with

Desmundor Alcademon . But well... my pacifist cat never had a chance.

Ingrid L'lerim-Vandiir oh fear not, theres many more chances ahead ^^ Now that my Alcademon units are approved, I shoot out a fair warning for next big event... Things will get rather..... Infernal ^^

This all could have been resolved peacefully if only Dis had been willing to become the Maws Mascot. So since they refused an example had to be made.

It was a bad wording!

More from The Mongrel