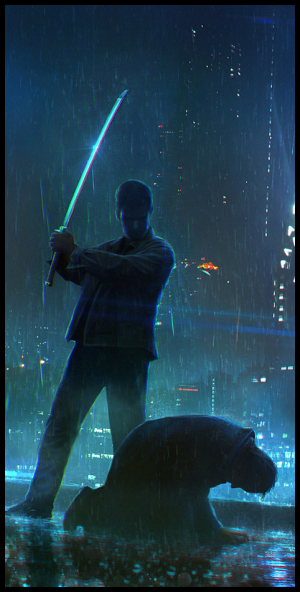 From the gutters of Nar Shaddaa to the darkest depths of Coruscant, crime was thriving. Galactic instability for decades had created and reinforced an environment for crime to thrive. Though crime itself was not immune to the chaos that the galaxy faced. Vast criminal empires, powerful syndicates and terrifying gangs came and went with the wind just as fast as the nations across the stars. There were some among the crime lords who achieved legendary status; the elusive Black Sun Vigo Domino, the cruel Hutt Cartel Kajidic Sempra the Hutt, renown pirate Flannigan McNash and suave master manipulator Lysle of the Hydian Way.

The time of legends had passed. Some syndicates tried and tried again, each time failing worse than the last, to crawl their way out of failure. The night had come for the Black Suns, the festering distrusts of the Hutts had torn themselves apart and the Ravens flock had taken flight into the Unknown. Small bands of pirates, smugglers and vagrants took to the stars, wreaking havoc without control. No one to pull them into line. Former hitmen became famed bounty hunters. Julian Valentine, Ghorua the Shark, Koda Fett. They became household names for parents who wished to keep their kids on the straight and narrow. In this galaxy without powerful syndicates to keep check and balance they stumbled and crashed through life, as though they were nothing more than unsupervised toddlers. Caring naught for the damages they done, the bridges they burnt.

In the underworlds across the stars was where the jetsam of the galaxy,
A motley collection of sentients dismissed by those above simply as the under-dwellers,
Eked out lives of brutality and despair.
It was merely a different kind of jungle,
And where there’s a jungle, there are always those who hunt.
Reactions: Fatty, Colton Renth, Loske Treicolt and 4 others